...and back to harvest time in the Berkeley Hills... 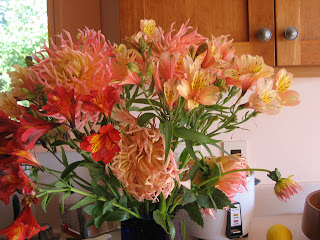 I got back to Berkeley on Wednesday night, caught up with Barry and the house, ate some tuna salad Barry had prepared and it was bedtime. Thursday I was up early to go back to my over-55's exercise class at the JCC, this time with the regular teacher. Rather more dancing-based aerobics , well-instructed so I managed to follow the routines (except for the line dancing, which I could tell was a simple routine but couldn't quite get the hang of ) and less weight work or mat work than I like, but at least it is 1 1/2 hours when I am doing something active with my body. I signed up for the new semester starting next week. Walking down to the class at a reasonable pace had me warmed up well before we started, and I got very hot and sweaty - decided I must bring a towel and wear a tank top next time! Sonya, whom I met last time and had since read some of the blog and found it unexpectedly interesting, didn't have time for coffee and is off to Amsterdam on the weekend, but we exchanged numbers for when she returns, and I met another few class members and hope I will get to know some of them better in coming weeks.


I did a very small supermarket shop for stuff I like to have in the fridge that was missing, and bought an unfamiliar fish to try also - I asked them for some ice to keep it cool while I walked home up the hill in the sun. This was my first chance to use the debit card that arrived in the mail while I was away. I haven't managed to find a way of using Oz-based credit cards or even taking cash out of ATMs overseas using Australian cards without incurring at least 2.5% on the transaction, plus whatever you lose on the currency conversion. You can avoid an additional transaction fee by using affiliated banks, but that avoidable $4 or $5 charge is additional to the percentage fee. So while Barry is working and earning locally, to the greatest extent possible we live off that cash or a local bank account. Unfortunately, in Mexico last year we couldn't get a local account with electronic access due to his immigration status, so used bundles of currency for most things. Here we have a local cheque account with on-line banking and debit /ATM cards, though the on-line banking seems less intuitive than what I use at home. Also, the "pay anyone" feature I use all the time at home to pay bills and transfer money to other people's accounts here is only relatively simple and free for accounts held with the same bank - there is a $30 fee to transfer funds electronically to an account with another bank, which is way too high, especially when looking at small transactions. Last time I looked, I could transfer thousands of dollars internationally from a Melbourne-based account for $25!


People still use cheques very extensively in the US: it seems an expensive anachronism, but maybe they have cheap labour processing all of the paper? I still recall watching how the ANZ bank processed their cheques maybe 20 years ago; despite the MICR coding (magnetic ink character recognition, those funny looking numbers on the bottom), it was still very labour intensive and involved many steps - at home I only write about 6 cheques a year for both of us and curse every time I have to deposit one, but it seems I will have to get used to it again here. 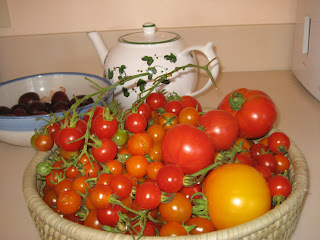 Away from matters financial and back to the land! The tomatoes are running riot in the garden, especially the cherry tomatoes which are unbelievably prolific, while the various larger heirloom varieties are ripening nicely (the yellow ones seem to be first). There are yellow and green capsicums (I will experiment and see if green ones I leave on the plant will turn red later) , several varieties of eggplants in rich deep purple or variegated purple and white stripes, a kind of cucumber which is round, yellow and slightly spiny (the more conventional ones seem to have finished), string beans which have been left too long on the beanstalk and have mostly gone yellow and overgrown, and patty pan (button) squash, which should have been picked a while ago. Some of them are huge and I assumed they would be pretty inedible, but the ones about the size of a bread-and-butter plate are still delicious steamed , though the football-sized ones need to be peeled first but then cook up fine in a ratatouille style mixture. I gave one to Janet and recommended the ratatouille approach, and she found it worked well also. I haven't used any tinned tomatoes in cooking, I just put in the cherry tomatoes which are bursting out of their skins with ripeness and chop up and add a few of the bigger ones, starting with any damaged ones. I am keeping an eye out now and will be and picking the little ones before they get too big for their boots! See a couple of these with their blossoms still attached in the photos below, along with a dark green squash of some kind, which I haven't tried yet - there are at least 4 more hiding amongst the leaves on the ground, and several more not yet big enough to leave their mother.


In the herb department, Italian parsley, thyme, several types of basil and rosemary from the garden have also enhanced my veggie stews for pasta sauce and side dishes. The various salad greens are largely the rather bitter sophisticated type - I adore rocket (called arugula here) but find most bitter leaves a bit too strong for my taste. Also I have filled vases with flowers (see the first photo of just one vase of about four dotting the house, including lots of fragrant roses) and while I am harvesting, I have been eating the ripest of the blackberries growing through Tom and Janet's fence, and the few pale orange raspberries on the canes. The mission figs (look like the blue figs in Melbourne) are not yet ripe so I can't report on flavour yet, and the apples likewise. 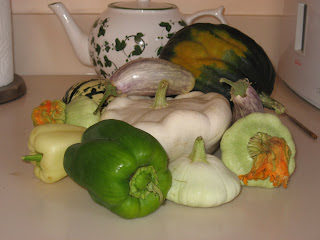 And remember, the downstairs neighbours are also helping themselves to the produce. I am no kind of gardener, so it seems quite an undeserved bonus for me to be harvesting all this yummy stuff from the garden ,which I have lifted not a finger to produce. In response, I do feel obliged to cook it and not let it go to waste. I can see the kind of kitchen slavery that a garden in full production could generate for an industrious housewife! Note that I have cooked all the more deeply coloured eggplants, only a couple of stripey ones are left in this picture.