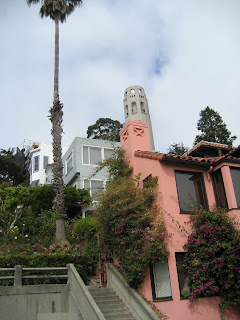 Last weekend we decided to take one of the free walking tours in San Francisco that we had learned about in a brochure we picked up at the airport. To get to San Francisco from here would be easy by magic carpet - we could fly along the line of sight directly from the kitchen window! However, as mere mortals we walked to the bus stop, took the 67 to the BART station, and got the train from there to the Embarcadero station on Market St. 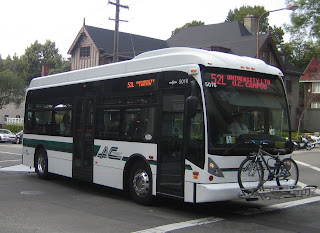 And now for a really long aside about public transport in Berkeley. I really wish there was some kind of stored value multi-mode card that you could use on all the public transport here. Barry read something out to me about such a system on the bus yesterday, but I couldn't find any reference to it on the transit company's web site. As it is, you need exact change on the bus ($1.75) and another 25c if you want to transfer within 1 1/2 hours, but can only use it for a single transfer. (we often transfer to or from the 51 bus, pictured. Note the rack for bikes on the front - Bull Bars on 4WDs are bad enough, but this would certainly inflict a lot of damage in a collision!) You can also buy a 10-ride ticket, which I finally did a couple of days ago, or a monthly pass, at selected outlets, though not on the bus. Barry also discovered that as a staff member at the University of California, he can get a partly subsidised bus pass which is good for the whole year (and can get the value for the months he doesn't use returned when he leaves). We were having recurrent crises due to shortage of dollar bills and change, so at least we don't to worry about that any more. 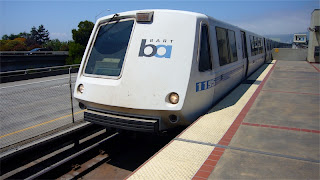 You can buy a card from a machine at the BART station which allows multiple rides and debits the amount you have spent each time you put the card in at the end of your ride - unlike NYC, where there is a flat fee irrespective of distance travelled on the Subway and buses within a given time period - but you need to put the card through the turnstiles on entry and exit, whereas in NYC only on entry. With BART, you can subsequently add value at another machine, using a credit card or cash. But the BART system is not linked directly to AC transit who run the Berkeley buses, though you can get a transfer from a different single purpose machine before you leave the station which gives a 25c discount on the local bus in San Francisco. The New York City MetCard is much smarter as it works on the trains and buses and allows transfers. The ongoing debacle, budget overruns and non-delivery of the Myki Melbourne public transport ticketing system seems so stupid and such a waste of money - with all the different systems in place in every part of the world, surely there was one which would have worked without starting design again from the ground up.

I note that everyone flashes their pass or pays their fare on the bus. I really dislike the Melbourne ethos where people don't pay on trams because they can get away with it - it may have arisen because of a series of bad decisions about how to run the public transport system, but I think it indicates a lack of sense of ownership of the transport system which is in a complex dance with poor service, neglect and under-resourcing (both human and infrastructure) which really detracts from the system. Mind you, the buses here are not so well-patronised most of the time. Our local bus is apparently only really full when the kids getting out of school are riding home, and the seating configuration is more accommodating to wheel chairs than to run of the mill bus travellers, with few seats and those are very uncomfortable. And it stops running around 8PM weekdays and before 7PM on weekends, which mandates a long walk home or a taxi after a movie or even dinner in our non-car-owning state.

I have just joined the Berkeley Public Library, whose main branch near the Downtown Berkeley BART station is in a splendid Art Deco building with friezes (reproduced on the library card design I chose) and lots of brass. I found all kinds of great resources there, including bus system maps which will be very useful for figuring out how to get places - for example, to the hairdresser I have been recommended, or the best route to the various malls for occasional shopping forays. I finally found a reference to a stored value card, but haven't yet checked out the link. This morning I was on time for the bus due to leave about 9:05, reassured that it hadn't come early by the other people at the stop, including Brody, our downstairs neighbour, who had already been there for some time. When it still hadn't shown up, he called his wife Esther at home and asked her to check "NextBus" on the computer, which supposedly tells you when the next bus is due at your stop, using GPS information from the actual bus. When it said 17 minutes, he decided to walk but I figured I'd get where I was going just a bit sooner if I waited - but it took about 25 minutes for it to turn up. I asked the driver what had happened to the earlier bus, and he said it had broken down.

Later today I thought I would have just missed the bus home from the closest stop to the supermarket, but there were still people waiting there. We got into a conversation about what happens when a bus breaks down - one of the women had been waiting for the same bus (which many kids take to school) in the morning, and said about 20 kids were late for school. Her husband used to be a bus driver with the AC Transit company, and she says they don't bother to send out a replacement bus, so there will be problems with the schedule all day. The bus we were waiting for arrived about 20 minutes late, and I was pleased not to schlep my groceries up the hill in the 30 degree heat. When I got off, I saw Charlie, our next door neighbour, waiting for the bus down, and while I figured that under the circumstances I'd have time for a long chat with him before his bus would actually arrive, I decided after few minutes'conversation that my groceries were getting warm, and came home instead. I was half an hour late to my Spanish class in the morning, but such are the vagaries of using public transport, and I was philosophical as I got where I wanted eventually, at both ends of the day. 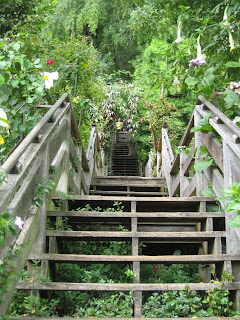 To get back to the main travelogue: when we arrived in San Francisco, it was a nice morning and rather than wait for a connecting bus, we walked through the streets till we reached a staircase leading up to the Coit Tower. And when I say up, I do mean up! There is an immense wall of rock to be scaled and we climbed and climbed and climbed. I stopped to take photos, not so many of the views behind us over the Bay looking east towards the Bay Bridge (where we had come from) , but of the houses that give onto the stairway and the lovely gardens (and to be honest, to catch my breath!) 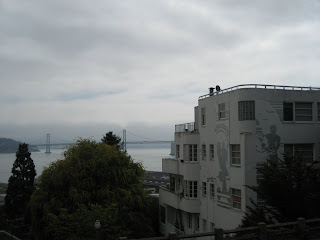 Here is a link to the many photos I took of the murals: http://picasaweb.google.com/bjoymarsh/CoitTowerMurals

I have been trying various methods to get many photos up on this blog in a reasonable amount of time. I have posted just four in line below, but if you are interested, please follow the link to see all of the photos I took. I think you should be able to look at them as a slide show. 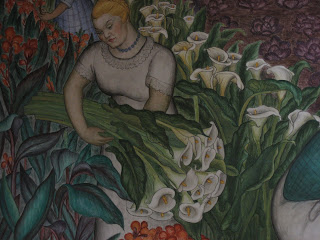 The tower itself was built using funds set aside by Lily Coit, who had been rescued from a fire in which her playmates died by the Fire Brigade and thereafter became a great fan of the firefighters, and the mascot of the Brigade. She lived a pretty eccentric life for a woman of means in the late 19th and early 20th Centuries, and left money to put up a public edifice of some kind in thanks to the fire brigades and for the betterment of the people of San Francisco . It is a simple structure atop the already very high Telegraph Hill, and the murals were put in as the pilot project for artistic work as part of the WPA during the Great Depression. 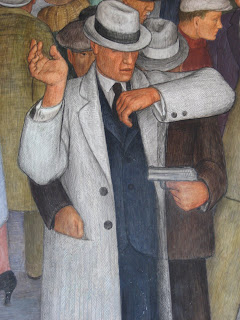 The guide walked us round the entire tower, and then up an internal staircase now closed to the public, introducing the artists who had done each of the mural panels, which are about life in California, from rural pursuits, through commerce, the press, labour movements, electrification, transport, leisure - there is crime depicted, left-wing journals on display along with movie magazines, and in some of the works we can see the Talmud and works of Karl Marx among the books on the shelves. 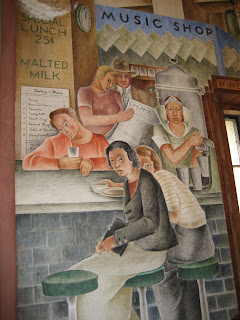 The politics of the artists were varied, one Fascist sympathiser of Hitler had his panel (see the lunch counter) but the majority of the artists were of a more left persuasion, and in many cases had been influenced by Diego Rivera (see the pictures of the lilies, which I took to be an homage to him). The opening of the Tower was postponed because one of the artists 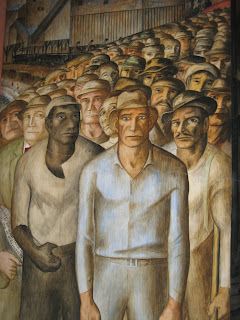 had gone too far for the citizenry (or possibly the conservative media of the day) to bear, and they mounted a successful campaign to remove very obvious references to the Soviet Union and the international struggles of the working class on one section of one wall. As the artists had used true mural techniques working with wet plaster , the entire completed panels had to be chipped off as they could not be painted out.
Posted by Barbara at 8:28 pm