From our house, we get to Solano Avenue by turning right at the first corner, walking down Indian Rock Road to the park where people practise rock-climbing and go to drink beer and watch the sun set, then taking one of the many paths in Berkeley, incorporating lots of steps (a bit like those scattered about in Sydney, near Wollomooloo , for example). There is a Berkeley Path Wanderers Association, a group of volunteers who help maintain and renovate the paths, and organise walks along some of them. Whenever I see a sign to a path, as long as I am just walking and not on a tight schedule to get somewhere, I take it, and am often rewarded by charming gardens, gorgeous views and surprising shortcuts.

Solano Avenue is renowned for its eateries and for being a generally interesting place to wander about. On previous occasions, we have eaten at a really excellent modern American restaurant called Pimlico, which Barry chose from an article on the local eating scene that he had printed out before we left home. Not having read anything about it to generate expectations, I was very favourably impressed by the food, although the description of the produce was a little over the top for the uninitiated: who knew that Blue Lake is a region that grows string beans? I was expecting beans in a lake of blue sauce, but had no complaints about the beautifully steamed beans on the plate accompanying my main dish, and realised that they are serious about locally sourced products. 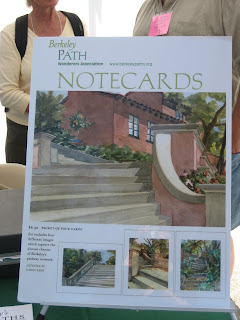 We have also shopped at the supermarkets along the strip – the branch of Andronico’s (which carries more exotic and organic products than Safeway or Lucky) seemed to have a very knowledgeable guy on the fish counter, who was explaining to another customer that steelhead salmon is an ocean-farmed fish, what we refer to as ocean trout as home. They also sometimes have tasters of their “adult” chocolate chip cookies – full of dark chocolate chunks and too good to take home, where I would not be able to resist them. Another evening, we tried a Thai restaurant at random: the ambiance was good and the tod mun pla (as the fish cakes would have been called in Australia, here they were just tod mun), were excellent, but the other dishes we had lacked the freshness of flavour we expect from Thai food, so we will try another of the many Thai restaurants on the street next time. We also came across the street astronomer, a local astronomy buff who set up his 10 inch Dobson telescope in the street aimed at the very bright Jupiter, with three of its moons also visible (there had been 4 earlier; one had just disappeared around the other side of the planet by the time we stopped to take a look.) Gael, a fellow student from my U3A "Why is it so" course, told me she had seen a programme on TV or an article about this guy – it was really a great experience to share his enthusiasm. With so much ambient light I was surprised we could observe anything in the heavens above, so I was especially delighted with Jupiter. I hope to catch him again some time - maybe I could see Saturn and its rings if I get lucky. 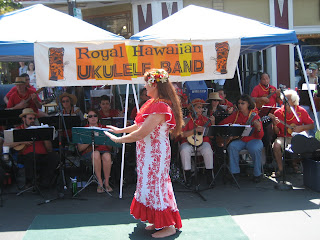 Once a year they organise the Solano Stroll, which is a very long and well-attended block party, where many of the local organisations and stores have stands on the street, bands play, dance troupes are out, and the local High school chorus performs every hour on the hour. The ukulele band was a bit more unusual than the various rock, jazz and folk groups, but I was impressed by the large number of groups of what looked to me to be very young kids, early to mid-teens, who were doing a good job of live performance. Performance venues such as Ashkenaz, which presents World Music , had stands, and so did old and new community organisations including the ACLU (American Council for Civil Liberties.) 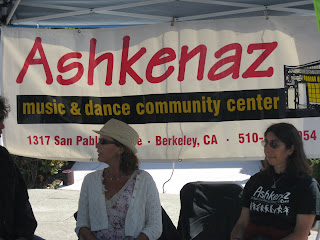 The character of the stands changed as one progressed down the hill from Berkeley to Albany. Up the top where we started I was astonished to encounter more Jewish organisations than Buddhist, and more of both than Christian organisations. I was able to find people who knew where to buy kosher chicken, which I hope will be tastier than any other I have encountered here so far, and there were many kinds of Jewish New Year services on offer, but as I will be celebrating the Jewish holidays with family on the East Coast, I didn't sign up for anything. 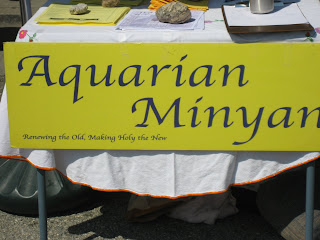 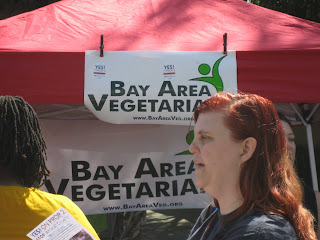 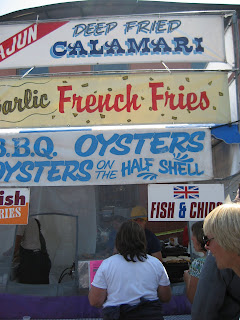 street food offerings as one descended, also. There were many green organisations, promoting recycling, green energy alternatives, solar power etc. Also there were many political stands for the various candidate standing for local or state elections which coincide with the Presidential elections, and a lot of Obama merchandise and opportunities to register to vote. The photo below is of a life sized cardboard cut-out of Obama. If I had not lost Barry by the time I got there, I’d have got him to take my photo with it!
Unfortunately due to my taking too much video of Morris dancers early on (unintentionally: with my sunglasses on I can't see the screen very well and didn't realise I was still in video mode) my camera battery went flat before I was even halfway down so I couldn't begin to capture on film the variety of merchandise, propaganda, activities and consciousness raising on offer. 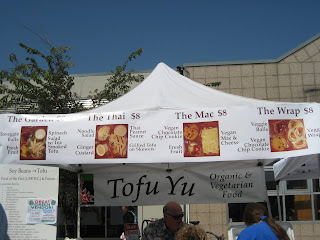 I enjoyed talking to the people manning the stalls and looking at the produce, though I was so not- hungry that even the smell of marinated chicken grilling didn't tempt me, and I didn't see any gelati which might have been a temptation in the warm afternoon sun.

I stopped at a jewellery stall which had very nice mostly silver stuff set with semi-precious stones, and as I was scanning the display cases, the stallholder said to me: "You're wearing my earrings!" "I don't think so", I replied cynically, "I got these for my 50th birthday about 15 years ago in Australia." "We used to have a store in Walpole Street, Kew, called Jeeba" she said. It closed in 1994 - indeed it was the very local store where Sue had bought me the very earrings I happened to be wearing that day, in their closing down sale! What are the odds? We had a great reminisce about Kew, and Alphington where they had lived previously (close to where I lived before moving to Kew in 1976). They had lived in Melbourne for 11 years before returning to the US to be closer to ageing parents, have dual US-Australian citizenship, and now manufacture in Davis, CA, and sell at street fairs and shows all over California and other places. A former partner in their business has now reopened in Australia on Collins, so I will be sure to look in there from time to time to see what's new in their range. They haven't made my earrings for years now, but Jeanne and her husband agreed they are very nice and maybe they'll start making that design again! I have tried to take a picture of the earrings but I am not good at using the digital zoom and they all came out looking gold rather than silver, and too blurry to make out. So you will have to imagine them, or maybe in a subsequent post you may see me wearing silver and moonstone earrings as I don't have so many other earrings with me on this trip (but no prize is on offer to the first spotter!)
One other display I particularly enjoyed was several "art cars", heavily decorated but still roadworthy cars covered with every imaginable kind of imagery, both inside and out, from many tiny figurines stuck to every conceivable surface through metallic animal features on the outside, leopard-skin and animalia interior. Our Melbourne-based friend Ralph Newmark has done his car in a kind of Latino street way, and it always occasions wonder from passers-by when parked - there was an Art Car Fair scheduled for the next week which we were unable to attend, but that would have been an eminently blog-worthy event! I have been looking for the flyer for this event but I have mislaid it - I took notes on it to remind me of some of the things I intended to blog about, and the fruitless search has delayed this post for the whole time I have been away on the East Coast.

I have posted the photos I took on Picasa so you can see the lot. I think it may include a short video of people dancing to a band.

There is also a bit of bad video of Morris Dancers, but it is sideways and I can't figure out how to rotate a video! All technical advice will be gratefully accepted. 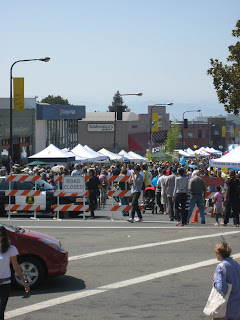