By Ferry to San Francisco 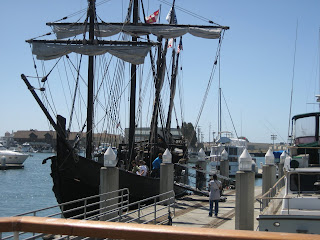 A couple of weekends ago we decided to explore a few more local neighbourhoods. We took a bus to downtown Oakland, slower than travelling by Bart but you get to see a lot more. As is so common in US cities, we observed how the neighbourhood changed, sociologically, ethnically, and economically speaking, block by block . And also topographically - as opposed to the extremely hilly area where we are living, from downtown Berkeley to Oakland it was pretty flat. Lots of churches everywhere. There were areas with many boarded-up stores , some areas with well maintained houses but more seemed run down. Mind you, we were travelling along a main road beside the elevated BART tracks, which may not be typical. 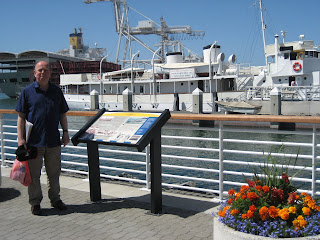 We got off the bus in deserted downtown Oakland. It was the Labour Day long weekend, and they were setting up a weekend-long musical festival in a large area just off the main street, but it hadn't really got underway at the time we were there. The stiff breeze also made it a bit chilly out of the sun. So we made our way to Oakland's extensive Chinatown (or Little Vietnam - we felt like we were back home in Victoria Street).

In our brief preliminary reconnoitre, we found cooking sauces and vegetables we have been missing, at prices a lot more like Melbourne prices than the few upmarket versions we have seen in some specialty sections in the Berkeley supermarkets. As usual in these Asian grocery and produce stores, we saw lots of things we could not identify. There was an extensive array of variants of teeny dried fish, some with sesame seeds, some sweeter, some spicier, which we sampled. Definitely will bring some home as an interesting nibble with drinks another time, Probably foolishly, we bought just a few not too heavy or bulky things - sweet chili sauce, mee goreng type packet noodles, fresh lemon grass, wasabi peas, miso soups - and carted them about with us all day.

It was too early for lunch, though yum cha (called dim sum here) beckoned seductively, so we carried on walking down to the port area, to Jack London Square, a relatively newly developed area with souvenir stores, chain restaurants and various historic ships you can take a tour of. The photos above are of one replica of Columbus's fleet, and of Barry in front of FDR's Presidential yacht, (his floating White House), the USS Potomac, which was not open for tours the day we were there.

The ferry to San Francisco leaves from a dock at Jack London Square. We checked out the departure times and figured we could wander back and maybe have quick lunch at an interesting-looking Peruvian restaurant we had passed on our way down. But first we looked around the waterfront and noticed a solid-looking ship moored at another dock in the harbour, painted red with RELIEF in white lettering on its side. As we were wondering what it was, a former seaman in the Merchant Navy who used to work on the Light Ships (which were basically floating lighthouses that anchored in places where they couldn't build a lighthouse) offered us a personalised tour. This particular boat, after 19 years of duty off Delaware and Cape Mendocino, became the ship which went out to relieve permanent light ships off the West Coast, when they needed periodic maintenance. 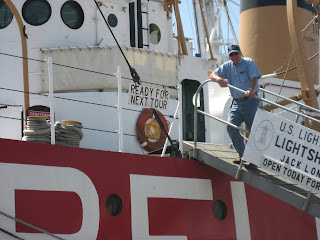 Whenever I meet someone who has been a worker in a particular area that I know nothing about, I am fascinated by their account of the ins and out of their working life. The detail he was able to fill in as he took us over the different areas of this (small!) boat, and painted a picture of life at sea, was really interesting - where the crew slept, vs the officers quarters, the bathrooms, the kitchen, the engine rooms, the huge mushroom anchor and the immense length of heavy chains that secured it, the mechanisms for raising and lowering it, the awful jobs and the good ones on board, how the light worked, the communications systems. He spent ages with us, and then it was nearly time for the next ferry, so no lunch in Oakland for us. 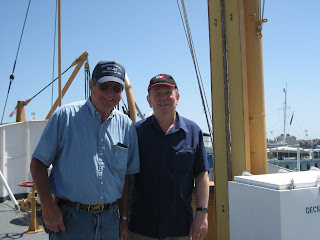 The ferry was a bit late, and there were lots of family groups spending time together. I found it too windy on the upstairs open deck so went inside and looked out of the panoramic front windows as we went sailed past the vast dock areas with mega cranes and extensive areas of containers from shipping lines from every corner of the earth. We also see these from another angle coming into and out of West Oakland on Bart rides to and from San Francisco. There are great harbour views of San Francisco, Treasure Island and the Bay Bridge. with the Golden Gate hazy in the distance. We skipped the first stop at the Ferry Building Terminal (we'd been at the produce market there the week before) in favour of the next stop, Pier 41. Then we wandered about through the crowds of tourists, avoiding the trams from around the world that run along this part of the Embarcadero (no Melbourne trams this time, but we did see and old W class tram last November when we visited). We settled on a seafood restaurant to eat a rather late lunch. We are getting used to how large restaurant servings are here, so we are now ordering "appetisers" (= first course or what Australians would call an entree) rather than "entrees" (which, counter-intuitively, means a main course here), or fewer dishes than we would at home. 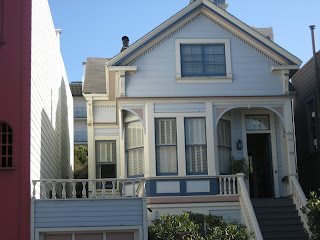 After a bit more walking through highly touristy areas, we headed off, we hoped, for a long walk to the Presidio. But it was a lot further than we thought, and it was windy and chilly, though sunny. And the neighbourhood, though pretty, hilly and full of beautifully maintained typical San Francisco Victorian houses, was totally noncommercial, hence not a cafe to be seen, and no public loos. So eventually we turned back towards the more commercial areas and found a bus to take us back towards North Beach and Chinatown. Fortified by good coffee and gelati, and much relieved, we set off towards a Bart station by bus, but the traffic was so heavy that we the bus was barely moving, so we got off and walked down to Market Street and the Bart Station instead. There are so many tourists in San Francisco: never have I seen so many copies of the Lonely Planet and other guides in every language in every hand, not even in the sidewalk cafes of Hanoi or Ho Chi Minh City. On weekends the last 67 bus leaves Downtown Berkeley Bart before 7PM, so we missed it and got a cab back from the station.