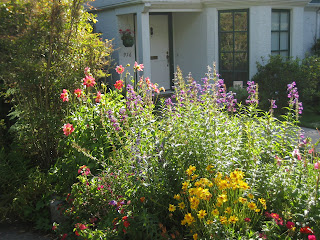 We had a busy day on Wednesday. We walked down to Cal (which is how the locals refer to the University of California at Berkeley) campus, which took us about 25 minutes, then found our way to the right building by a combination of consulting campus maps and asking people. Barry had to go into the History Department to fill in a lot of forms. This may not sound difficult, but the Dwinelle Building reputedly has undergraduates who have been wandering about for years trying to find the room they need. It is a rabbit warren, rather like those old hospital buildings in Melbourne where wings have been added over time and the same floor is referred to differently in different lifts. Rooms in one direction are numbered in the 100's and around a bend on the same level are suddenly in the 3000's, and there are rooms off other rooms and corridors off rooms and rooms off corridors. And at least one wing has a peculiar smell that transported me directly back into the Old Arts Building at Melbourne Uni in the 1960's. 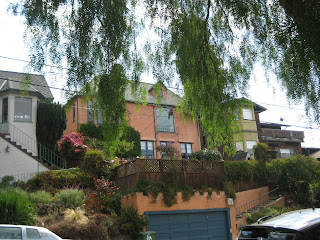 The campus is very hilly and really lovely, but very large and confusing. You really need a map to tell you where the maps are. The admin staff were all very helpful, but as it is vacation time, and summer school is still in progress, no space is yet available for Barry's office in the History Department, though later in the day when we visited CLAS (the Center for Latin American Studies) where he is also affiliated for the semester, he was assigned a very nice office complete with their Mexican library, so he will feel right at home. There is an extensive programme of visiting scholars, seminars and activities at CLAS, and again, the staff were very helpful and welcoming. It is located just off the campus, around the corner from the hotel we stayed at when we were here briefly last November, so we had no trouble finding it.

Likewise, the local bank branch where we added me as a co-signatory on the account Barry has had since we were in San Diego about 25 years ago was a couple of short blocks away in familiar territory. The quirks of the US banking system, state-based rather than national, always confound us. For example, when we tried to access account details earlier this year at a bank branch in Philadelphia, they couldn't find out whether I was a co-signatory already as those details were only available in California. At least there are now branches on the East Coast, but unfortunately I won't have my own ATM card before we head off to New York tomorrow. 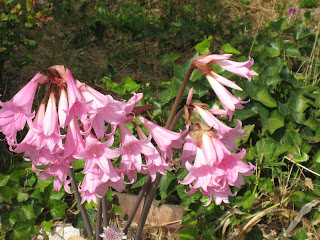 We consulted the Yellow Pages a the bank to find an AT&T office, a bit further afield but near the Berkeley BART station. As we usually visit the US for short periods, a mobile phone contract doesn't really work for us, so we get pre-paid SIM cards to use in our tri-band GSM phones. There are few GSM suppliers, and coverage is not brilliant, so though we are not wild about AT&T's service,there are not many options. It is annoying that in the US you get charged for incoming as well as outgoing phone calls, so our phones ending up costing more than they do at home, even though Australia is notorious for having expensive mobile phone services. At least with the chips we now have, we can call each other free, but there is a daily charge for using the phone at all. 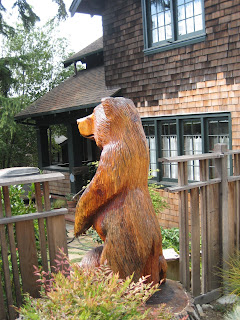 We wandered home via the supermarket: Barry was planning to take the bus home with the weighty stuff (not much of it) and I the very light stuff. We stopped off to check out the JCC, and somehow walked off in the wrong direction. This would be par for the course for me, but Barry is usually much smarter. And also he didn't realize that the bus turned off Spruce St rather than continue all the way along it to and from campus, so when we eventually got back to Spruce after quite a (hilly!) detour, there were still several uphill blocks to negotiate before we found a bus stop. I carried on walking uphill all the way home, taking photos of neighbourhood homes and gardens on the way (some posted here, other shots of the 'hood yesterday yesterday - this bear a couple of blocks away is carved directly from a tree that must have been there before, while all other garden sculptures I saw were metal), and Barry's bus passed me about half way back. It was a very warm and sunny afternoon, and I only got home just in time to change out of my sweaty top and head to the party next door. 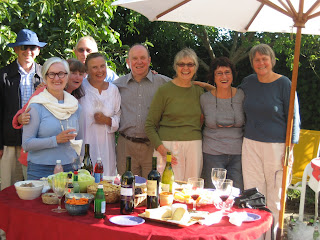 Tom and Janet are our new downhill neighbours and had offered to host a welcome party for us to meet them and the other neighbours in their garden. It was a lovely idea and we spent a completely delightful few hours, getting to know the people in the immediate vicinity and eat delicious food (we had brought some Australia wine to complement the supplies laid on by our hosts), including a home made san choi bow using turkey mince. Several more people arrived after this photo, including Krista and Mike with their 3-year old Kit, who took a while to warm up and after many people had left, kept the stayers in stitches. Monica (one of our landladies) is on the right.

Thursday morning I got up early and walked down to the over 55's exercise class at the JCC. It was fun but harder work than I am used to, and I am a bit stiff today (probably be worse tomorrow). The class members were pretty friendly, and I met a woman who lives in our street, so if it is pouring rain I may be able to cadge a lift in future. I also had a coffee at Berkeley institution Peet's with Sonia, who will also be travelling over the next few weeks but I hope will turn into another new friend. With her help and advice from a friendly merchant in a shoe shop nearby, I was directed to a store close to campus where I bought the new Brooks shoes I needed. The guy in the store gave me a pair of socks as a wedding present when I mentioned my son was getting married during this trip! He also offered to call me if end of season stock became available in my size and model at sale prices. This is what I call customer service! He is across the road from the Berkeley Sports Centre, so I checked out the facilities and membership options there before wandering though campus, getting lost for a while, then walking back home.

I raided the garden for some beans, pattypan squash, cucumber, tomatoes and herbs, and got to know the kitchen a bit better as I made pasta sauce and a salad for dinner. I am still totally blown away by the view from the kitchen window, and have pretty much taken up a spot at the kitchen table where I can view this spectacular panorama as my workstation. It is nearly 2PM as I write and the sun has only just come out, and I can even see the San Francisco skyline mist-free. Time to get out amongst it.