We decided on a flying visit to New York City from Berkeley to see Ben and Lissy for the first time as an engaged couple. Barry could only spare a few days as his semester starts in a couple of weeks, but I decided to stay for 10 days. I find that my trips to NYC are a bit like merging onto a freeway on-ramp: you have to get up to the speed of the traffic, and it always takes me a few days in the City to get moving fast enough to get up to the pace of New York, let alone pack in all that I want to do. Fewer than 10 days is just not enough time to catch up with family and friends from when I used to live here in the late 60's and early 70's. 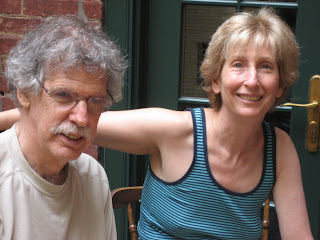 It is great to be in New York again. It is so good to catch up with old friends, though now we are spending more time in the Northern hemisphere, we are seeing our US-based friends a lot more frequently than in past decades.
We are staying at Joan's - she is at her summer house in Putnam Valley so we have the place to ourselves (I say "we are" - in fact I am writing while I am still here, but Barry has left - he has already returned to Berkeley to get set up for his semester's teaching.) We went to Jay and Ellen's for brunch on Sunday, all-American blueberry pancakes, sausages and maple syrup. We last had the pleasure of their company in Melbourne in February, when they finally made it down under to Australia and New Zealand . Ben and Lissy joined us for a while when they returned from visiting Lissy's sisters and their families in the Washington DC/Maryland area. Here are Jay and Ellen and Lissy, sitting on the deck, and Ben and me in a tiny video Barry shot by mistake, . 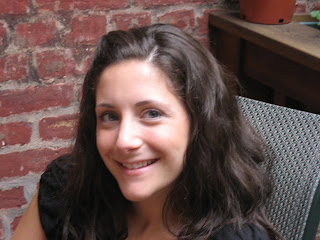 They have an amazing tablecloth made for table with an umbrella. As well as a hole in the centre to accommodate the umbrella pole, half the cloth unzips to open out so you can take it off the table while the umbrella is still up! I was impressed with its ingenuity: though I have cut a hole in the middle of a cheap plastic cloth to use at home, I can't say I ever shopped for an outdoor cloth equipped with a hole so it may not be anything new to the frequent outdoor diners amongst you!

Later we came uptown to Joan's apartment and I gave the kids some stuff we had brought for them, including a photo album from Ben's childhood, which we all enjoyed looking through. Ben and Lissy had taken their first ever Zip car to Maryland (a short-term rental, modelled on bike pools in European cities) and found it a great success and reasonably priced. They had to return the car to its garage in the Chelsea area - not the nearest to their apartment, but the closest place which actually had a car available at the late stage they had booked). The fuel and tolls are included in the tariffs, paid for by a card which comes with the car, and you are meant to leave it at least 1/4 full, so we detoured via a gas station to fill up. I forgot to note the price of petrol, which is still considerably lower than in Melbourne, I believe, and way lower than anywhere in Europe, of course. We are considering using a zip car in Berkeley, but there are no garages close to where we live, but maybe with further research we'll find somewhere more convenient to our house.

Bob and Emily met us at the garage after their day's activities which had brought them into the city, and we walked down and randomly chose a restaurant that looked good for dinner together. With Daylight Saving, it doesn't get dark till nearly 9, and it was a balmy evening though we did encounter some thunderstorms on and off during the day and when we were on our way home. I decided to go all Sex and The City and ordered a Cosmopolitan as a pre-dinner cocktail. It was very ordinary, certainly not worthy of its delicious reputation: the food was also very ordinary, the great quantities not compensating for the lack of any flair in the cooking or presentation. We won't go back there again! The kids walked home, and we dropped Bob at Grand Central to catch the train back to Briarcliff while Emily brought us back uptown to Joan's, where she spent the night with us, as she needed to be in the city the next day anyway. Sorry, no photos as I forgot to take any!