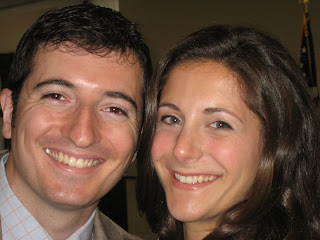 On Monday, the kids took some time off work and we had brunch together with Lissy's parents, then all went uptown to look at the Park Avenue Synagogue where the wedding will be held next January. They have recently celebrated 125 years in existence as a congregation, in which time their history, posted in the foyer, shows they have merged several different congregations, moved uptown and across town in stages, and moved through being Orthodox and Reform-Conservative to their current Conservative affiliation. The Sanctuary is quite imposing and very suitable for a lovely ceremony, and it seems a very good plan to hold the wedding party in their reception area after the Chuppah so we don't have to go anywhere else, given how nasty New York weather can be in January. Then we checked out a nearby hotel , The Wales, where Lissy had arranged to reserve a block of rooms for out-of-towners coming in for the wedding. It is just a few blocks north of the Shule, and is a venerable older hotel nicely refurbished. There are not too many hotels in this part of the Upper East Side, and their suites are very nice though the standard rooms are quite small.

Actually, the weather was a bit nasty that Monday also - it was like the weather Melbourne used to be famous for ("if you don't like the weather, wait 5 minutes"). From somewhat humid sunny weather to dark clouds rolling in, flashing lightning and the drumbeat of thunder, we proceeded into intermittent deluges of pelting rain. Fortunately we were indoors for the worst of it, and able to stay there till it reverted to streets steaming in the sunshine. We just got to Bubby's for brunch as the first thunderstorms hit, and it was not bad to be munching my muesli and enjoying a fruit platter while it was bucketing down outside. Later, as we were about to leave the Wales, it started up again - and again, we were able to sit it out in an attractive foyer until it stopped, peering out at unfortunate pedestrians with inside-out umbrellas and very soggy shoes.

Lissy's parents and Barry had left a bit earlier, before the storm, so I was on my own as the kids went off to work and other activities. On Mondays, the Metropolitan Museum (which is just a couple of blocks from the Park Avenue Synagogue) is closed, so a visit was not on the agenda. But I chose a route home which took me up the buzzing 181st St in Washington Heights, as there seemed to be some pretty spectacular shoes in the windows of some of the shops and I am in the market for a pair to go with the dress I will be wearing to the wedding. Alas, despite my Spanish being up to enquiring about heel height, size and colour, there was nothing available with less than sky-high stiletto heels, out of the question for my feet and spine, which at this stage of my life both need some cosseting. So the quest for stupid shoes continues.

When I got home I went out for a walk round Fort Tryon Park in my comfortable Berkeley-purchased Brooks. I followed a pair of young women down a totally different path than I have taken before, and found myself at the very farthest end of the Park, almost on the street. I was able to get back home by following the signs to the Cloisters till I was back on more familiar territory. It is a very hilly park, a great workout for the calves, quads and glutes whether climbing or descending by turns. They are running an anti-litter campaign with amusing signs in English and Spanish, and I still get a kick out of understanding the Spanish. With the wet summer, it is all pretty lush and it is good to see so many people out enjoying it. I also enjoy seeing all the dogs - this walk took me past the dog run I have visited in the past with Joan and her dog, and I do find it very amusing to see Great Danes, pugs, chihuahuas and every kind of mongrel playing together - the doggy melting pot, I guess, very appropriate to New York's ethnic and cultural history.

Barry returned to Berkeley on Tuesday around lunchtime. As he had very little luggage, he decided to take public transport to JFK- the A train from Joan's goes all the way to connect to the Air Train, but not all A trains go all the way to the end of the line - so it took a bit longer than expected. He made it just on time, apparently, though he had left home before 1.30 for a 4.40 flight. He always likes to be early for flights, so it was a bit fraught.

After hanging out with him till he left and wasting time on the computer, I headed off for another long walk in the park. It always lifts my pace to have music with a strong beat, and I couldn't find a 60's rock station. So this time I was listening to songs on a couple of Spanish language stations on my radio. But while searching, I did also encounter a long diatribe about 9/11 and a conspiracy theory about explosives having been laid all along the central core of structural steel in the buildings, with a coalition of engineers and architects presenting evidence of this - I guess if you want to know more about it, you could Google. It was rather nice to hear that the loony conspiracy theorists are not all on the Right, took me right back to my days in NYC in the '60s!

On Wednesday I took the Broadway subway to Marble Hill in the Bronx, which is just half a block away from the Metro North Station on the way to Emily's. I suspect it may be quicker to go way downtown and get an express from 125th St, but I like this neighbourhood connection. I expected the fare to be more than the $3.75 I was charged as a Senior off-Peak one way, and paid with a $20. The machine gave me a whole lot of lovely shiny new dollar coins in my change - I felt like I'd hit the jackpot on the Pokies! But ever since I have had to convince people to let me pay using the coins - they seem to prefer the tatty old greenback. Coming from Oz where we haven't used notes for smaller denominations than $5 for decades, it seems peculiar that people should mistrust coins. Surely they must be harder to forge than the very old-fashioned paper notes which have not yet been plasticised, hologrammed, clear-windowed or in any other way updated for yonks.

Emily met me at the station and we hung out at her place for a while, giving me time to eat large quantities of really delicious apricots from her farmers' market and to compare gazpacho recipes. Then we headed off to visit Joan's summer cottage. It is part of an old socialist bungalow community called Three Arrows - they still have the Norman Thomas Social Centre where they have film nights and all kinds of get-togethers. It was a gorgeous day so we got in a swim in her lake, Barger Pond, where you swim off a dock with life guards, kayaks (with lifejackets) and assorted other recreational equipment. The swim was very refreshing , the water warm and cold in patches, but it is quite brown - not milk coffee like the Yarra, whose colour comes from finely suspended colloidal clay particles, but more like weak black coffee from algae. I had my goggles on and couldn't see anything at all through the water, but Joan says the algae are really good for her curly hair! Afterwards I donned a life jacket and joined Joan and Emily on a trip across the lake to view the wetlands. Never having kayaked before, I discovered it was way less uncomfortable than it looks, and apart from a few dodgem car type snarls, the others were very kind to me as I wobbled my way in their wake.

We had a few nibbles and a glass of wine after returning from the pond and showering, then went for a bit of a wander round the estate. Joan is considering moving up to a bigger house than her bijoux cottage, so she took us past it to check it out. She had invited us to stay for dinner of grilled chicken and vegetables and salads, but the gas bottle ran out so she transferred from the outdoor BBQ to the indoor broiler and we had a delicious meal anyway, all working harmoniously on the vegies for grilling, the potato salad and the caprese salad with wonderfully fragrant basil Emily had brought up from her garden. Then Emily went home and Joan and I spent some time lazing about reading before heading off to bed. See photos - I didn't take any by the lake - as Joan said, why would you take photos of 3 women of a certain age in bathing suits! 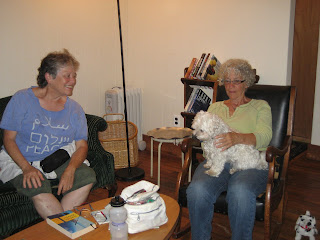 Dogs are not allowed in the swimming area, so we had left Joan's small Maltese Terrier Lille Ting behind when we went to the dock. When I changed into my bathers, I had unwisely unpacked my small backpack and left my travelling tube of Vegemite alone in the house with the dog. I went to get it for breakfast in the morning, only to discover tooth marks in the tube - and at last Joan understood why the dog had been so thirsty the night before! I intend to experiment with Vegemite's self-sealing properies (I am sure the amount of salt in Vegemite doesn't permit many living things, including bacteria from a dog's mouth, to survive) and may update you later on whether I actually decide to discard the tube or press it back into service! 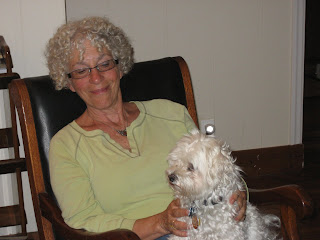