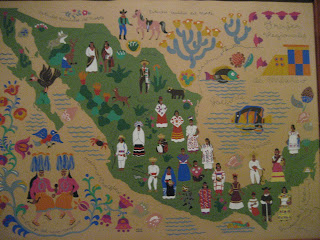 Schematic map of Mexico showing the typical regional styles of dress, from early-mid Twentieth Century.
Boy, did I get my packing wrong for this trip.  I thought it would be hot, with a couple of hours' rain most afternoons.  Apparently this is how the weather used to be, but climate change is here and we have had quite a bit of drizzle most days, occasional thunderstorms mostly in the afternoon and evening, and today we have had at least 5 hours of continuous quite heavy rain. It isn't exactly cold - but certainly not T-shirt and short skirt weather either.  For my various outings today, I wore the only long pants I brought, which are the ones I would normally wear with a smart top to go out in the evening - but I have no smart tops with me, and in fact packed only one long-sleeved top for the Mexico stay. So I called that into service and put my shower-proof jacket, which I fortunately dug out of retirement and threw in the suitcase as a last minute afterthought, on top.  Later on I bought a scarf at the Coyoacan Artesanias market to keep my neck warm!
I decided to head to the Museum of Popular Cultures close to home,  in the centre of Coyoacan, late this morning, as Herzonia was not available for a walk and Barry was not up for a major outing.  It has been renovated since we were here last and in its newly opened spaces had a special exhibition of images and symbols relating to Mexican identity, in the context of the bicentenary of Mexican Independence and the centenary of the Mexican Revolution, both being celebrated this year.  Creating a nation from all the different regions shown in the map above, with their different Indigenous populations, religions and traditions, required quite a bit of national myth-making. The exhibition looks at many different aspects of this process, from male and female stereotypes through food, music, costume, national heroes, etc.
As well as the exhibition, there was a series of events which seem to constitute a kind of folk fair, featuring handicrafts, food, lectures, traditional music, songs and dance called .La Guelaguetza - Viva Oaxaca  (here is where I tell you that Oaxaca, the state with a very large indigenous population, many wonderful handicrafts and many different musical traditions, is pronounced "wa-ha-ka").  Entry to the guelaguetza  is free as opposed to the roughly $1 charge for entry to the museum proper. 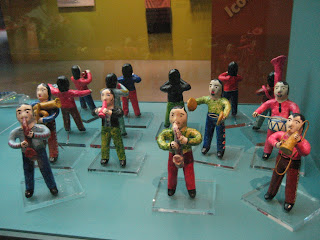 Clay Musicians on display at the Museum of Popular Culture.
There is a new mural on the outside wall between the two exhibition halls, evocative of Mexico's strong mural tradition but executed by some of today's Mexican graffiti artists. A film shows various stages in the preparation and construction of the mural, with people working with spray cans on large moveable scaffolds - a bit different to the scenes from the movie "Frida" showing Diego Rivera at work  (do get this Salma Hayek movie out on DVD if you haven't already seen it - it's really good!).  Oddly enough, given that this reference just popped into my mind, on Sunday we were at the Institute where those murals were painted and where Frida Kahlo met Diego.  Barry mentioned this to me and I figured I'd better put in something about that.  More of Sunday's exhibition probably on my next post (or at the end of this one)
If you go to the link below you'll see the photos I took at the exhibition, please ignore  the first shot which I don't seem to be able to remove.  Later in the day I returned to the Museum with Barry to see a concert of music and dance from Oaxaca as part of the guelaguetza, and this shot shows a local poet acknowledging the singer Diana Velasco, who was actually pretty good and sang between each of the dance sets.  (as usual, if clicking doesn't work, copy the link and paste into the address line of your browser.  Also note you can enlarge the photos by clicking on them.)
http://picasaweb.google.com.au/bjoymarsh/20100724NationalMuseumOfPopularCultures#
I tried videoing a range of the items on display but quite apart from the fact that Picasa won't load them from my memory card, they are hopeless and not worth looking at in any case.  Videoing an activity seems to work a lot better than trying to pan across a lot of still images, I have discovered.
I found many of the images from the mid Twentieth Century were extremely evocative - and I only started developing a conscious interest in Mexico in the '70's after I met Barry, so they must have seeped into my consciousness long ago.  There was a large section dedicated to the stereotypical masculine charro and ultra-feminine china poblana.  Loosely translating from the information at the museum, the china poblana was a  traditional fokloric feminine representation that gained prominence in the first decades of the 20th Century , immediately after the Mexican Revolution.  Beautiful mestizas, coquettishly dressed in petticoats and embroidered regional outfits, with accentuated feminine traits, riding side-saddle,   provided a counterbalance to the exaggerated masculinity of the virile charros.  With the growing urbanisation of the Twentieth Century, these stereotypes remain as folkloric icons rather than any kind of reality.
The shot of the set of display photos of little kids dressed  up in these styles also evokes what one sees a lot of on the streets around here - the little ones don't seem to mind getting dressed up even for an ordinary Sunday outing.  These days one sees more kids dressed up in superhero  or furry animal costumes than traditional folkloric garb, though there are still a few - apart from the children of some of the Indigenous vendors or beggars , who wear their style of dress totally un-self-consciously (and look comfortable and grubby and unkempt, with their hair uncombed, unlike the dressed-up little ones.)
In this video I took of some of the dancing at the Oaxacan concert this afternoon here is one style of - there were many costume changes and many different dances to enjoy, but given my upload problems you'll have to live without them.  I need to do some research on compressing videos and finding a site to upload them to, as it takes an age to get them up on the blog directly, and my attempts often fail.

If you are particularly keen to see some more, email me and I will send you the odd video directly.


The stage and seating for the concert was mostly covered by a series of large canopies, extremely fortunate for performers and audience alike as it poured the whole afternoon.The booming rain on the canopies also has affected the sound track. At one stage when we may have all been feeling a bit chilly, one of the organisers appeared with a couple of bottles of Mezcal, which is produced by artesanal methods in Oaxaca, and poured tiny plastic cup  tasters of it for whoever he noticed in the audience.  It certainly is warming - a flavour like tequila but much more smoky.  After one sip I passed mine on to Barry. The amount of clapping in rhythm and singing along increased noticeably!

Needless to say, there is a bookshop at the Museum and Barry ended the day there, picking up two heavy bags of books.  We thought about dinner then, so I left him in the queue to buy a rotisseried chook at a place a few doors away and took one bag and one umbrella home with me and had prepared some veggies for a bit of balance by the time he got back.
Posted by Barbara at 9:13 pm