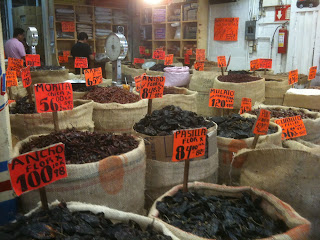 A few of the bewilderingly many types of chilli on sale at the Central de Abastos
I don't know that my life in Melbourne is any more boring than my life on the road, but somehow when I am home I never get around to blogging about my adventures at Queen Victoria Market, lunches with good friends, new babies in the family and my circle of friends, the classes I take, the operas, concerts, plays or movies we see, or picnics down by the Yarra. However, once we arrive on the other side of the world I am immediately struck by its exoticism and a strong desire to share its difference from home with everyone I know, so here I go again, chronicling my adventures here in Mexico.

We chose to stop over in Berkeley after our Melbourne-San Francisco flight to get a better- priced non-stop connecting flight on to Mexico than any available on the day we arrived. It also enabled us to drop off two large suitcases at the house we will be renting from mid-August until Xmas to have less to schlep to Mexico, and to do some paperwork on campus, which will expedite the procedures when we arrive for our extended stay just before Barry's semester begins. Sonya and Philip had generously invited us to stay over at their lovely house in the Berkeley Hills, complete with a glorious view across the Bay to the Golden Gate bridge, clear on the afternoon we arrived but deeply shrouded in fog the next morning when we left for the airport again.

As soon as we arrived in Mexico on Thursday night we felt right at home in the apartment, which feels like our home in Mexico. We popped out to the local Superama (part of Walmart's Mexico chain) to get in a few breakfast things  and grabbed a late dinner at VIPS, a Mexican family restaurant chain which also seems to be associated with Walmart and is often co-located. (Barry tells me that they used to send people around the tables asking if you needed anything from the supermarket while you were dining there, quite a good service especially for people who don't like to grocery shop!) They have introduced a "light" menu - they list calorie counts and grams of fat for these items, but not the saturated fat content that I need to compute points using the Australian Weight Watchers system (I went back to meetings and counting points as I had put on a few kilos and had climbed above my goal weight, so decided to stop the rot before it got worse. After a few weeks on the programme in Melbourne, I am just about back to goal weight but aim to get off at least another 3 kg, where I have mostly been for the past several years, to get really comfortable in my jeans.) Somewhat to my surprise, the dish I ordered, fajitas, was really nice, very un-oily, with the small sides also being low fat, so I estimate it was an acceptable amount to eat within my points allowance. 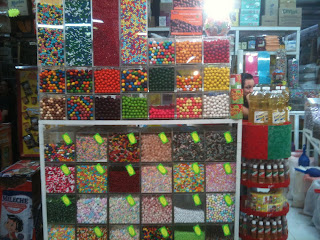 Bulk lollies on sale at the Central de Abastos: fortunately coloured sugar is not a serious temptation for me
On Friday we had breakfast with a US colleague of Barry's at a café overlooking the Plaza Centenario in Coyoacan, and later Barry bought some new shoes as the one pair he is travelling with need new soles. Buying shoes here is quite hard as the sizing doesn't cater well for wide feet (nor for large sizes for women: many styles I have looked for over the years stop about 2 sizes smaller than my feet). As Herzonia pointed out, looking at Diego Rivera murals you can see that many indigenous people have feet like tamales, short and fat, so it seems odd that they only make shoes for narrow feet. But it is nice that we saw many shoes made in Mexico, including this purchase - when did anyone last see a pair of shoes actually made in Australia?

Then Herzonia took me to the Mega Supermarket (a Mexican-owned chain) in the car to do a major grocery and fresh food shop, and also helped me get local phone chips to use while we're here - the prepaid deal supposedly available for my iPhone is not good value for only one month, so I am using it on WiFi only and am again carrying my old phone with the Mexican chip. I hope to get a better deal in the US so I can revert to having just one device to carry with me. 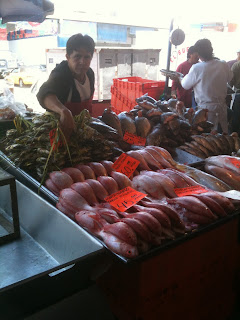 One of hundreds of stalls selling fish and seafood at the Central de Abastos
Today is Saturday and in the early afternoon Herzonia and her cousin Vicky had planned a trip to the Central de Abastos, the big Wholesale and Retail Market, so I was able to join them. We covered only the fish market and the section dealing with things like nuts, seeds, spices and lollies. I used the iPhone to take lots of photos and videos , I think they're of lesser quality than my camera delivers, but the main problem is I have no idea how to shoot a coherent video! But the ones I am posting do give a great sense of the colour and movement. I bought some fillets of huachinango (red snapper) and will report next time on how they taste - but the prices are less than half typical supermarket prices and there's no doubting the freshness.

I seem to have posted the wrong video below, but it took so long that I am loath to delete it!


First impressions of the fish market : sorry about the poor quality and bad technique!
Vicky bought some mojarra - the guy scaled them before I thought to video him, but I caught the rest of the fish preparation and some of the banter that goes on in markets everywhere: let's hope this is the right video!


I seem to have got a bit confused between Picasa and Windows Live Photo Gallery and where I actually loaded the iPhone images and videos and whether I have uploaded them to the web, but I am excited about this post so am going to publish without a link to the very questionable quality videos, wherever I may have posted them. I promise to try and get myself better organised by the next post!
Posted by Barbara at 7:34 am