On the air again - a quick catch up


I don’t know why I only use this blog when I am travelling – I suppose because it is after all named Barbara’s Travel Diary.  Particularly this past 12 months, when we have spent so little time at home in Australia, I found myself thinking that my adventures at home are as worthy (or not!) of a blog post as my overseas adventures. But in any case, lately I have seemed way too busy doing blog-worthy things to have any time to blog about them.

I am starting this post on the plane en route to Berkeley in late July, 2011, but who knows when or if I will finish it!


The last month or so that we spent in Berkeley in 2010 we did lots of things that might have been of interest, but I never got around to writing them up.  Barry’s J1 Visiting Scholar’s visa and the J2 I get as his spouse only lasts for 30 days after his teaching term ends, and we knew we needed about 8 weeks as we planned to be in New York for the birth of our first grandchild, due in mid-January. So after the end of his teaching and admin duties around Xmas, we headed to Toronto for a few days so we could re-enter the US on a tourist visa. We caught up with some old academic friends of Barry’s, enjoyed the bits of Toronto we got to see,but then we got snowed in on our way to New York in the post Xmas blizzard that hit the East Coast. Therefore  our Toronto-Washington- NYC trip took an extra day.  Our airline told us all flights were cancelled for the next 4 days, so we called Ben and he booked us seats  to NYC on Amtrak the next day (by which time we hoped the tracks would have been cleared) ;  a friend in DC who we could have stayed with still had  a house full of Xmas guests who had been unable to leave due to the snow, so we had to find  hotel accommodation; then our luggage went missing at the airport for half a day; we took the wrong shuttle bus for the hotel we had chosen;  etc. etc. We took a car service to Washington Penn Station for our train  from the hotel we had stayed in close to the airport, and there was not a snow flake to be seen on the ground or in the air, but when we hit New York many streets were clogged with uncleared snow and it was hard getting uptown from Penn Station to the apartment we were staying in for our first 3 weeks. We gave up on the taxi queue and negotiated in Spanish with a gypsy cab - Ben had met us at the station to help with the luggage, and later  very pregnant Lissy joined us for a quick Greek meal at a place she used to frequent in her student days. Melbourne Greek food is better! 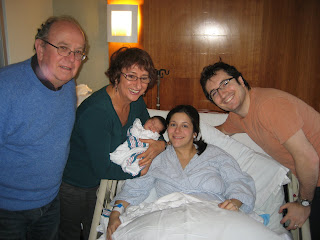 Ben and Lissy’s daughter Gemma arrived a little early (Lissy’s water broke while they were out to dinner celebrating their second wedding anniversary) so we were able to enjoy her for about 6 weeks before returning to Melbourne. That was a very busy and stressful time , as all new parents and grandparents know. We spent time staying with various old and new friends as well as at Ben and Lissy’s for a bit, and getting to know our new baby was as wonderful as all grandparents will tell you.  Leaving her was a real wrench, even more than it always is when we head for home leaving our only son and daughter-in-law in New York.

Then there was the usual flurry of getting our financial affairs in order, catching up on the economy and the performance of investments in the complex world of our superannuation funds and direct investments, and doing the tax returns before the deadlines. Then the Japanese earthquake and tsunami and related Fukushima nuclear plant emergencies happened, and our Berkeley friends Philip and Sonya, who had been planning a trip to Japan a couple of weeks later, agreed to come to Australia instead.  We had the pleasure of their company in Melbourne in a couple of tranches, on either side of their trip to Tasmania. And Passover came in the middle of their visit, which is always a very  busy time. We also managed to get lots of our friends over to meet them, though in small groups over a meal rather than any big parties. 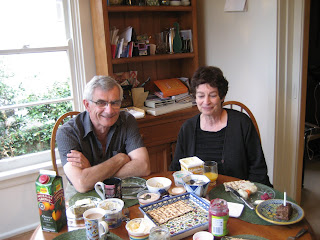 Sonya and Philip at the breakfast table (chocolatissimo birthday cake for Sonya)
Barry’s brother, Ron, who lives in the NSW Southern Highlands, reached an age and state of health where he needed to move into supported accommodation, so there were a couple of trips to assist getting him settled in a place near Bowral,  and Barry also had several trips to Canberra for academic purposes.

Next, Ben and Lissy arrived with Gemma for two lovely weeks, though they were in Sydney for some of that time.  We got to know Gemma all over again at 4 months.  Again, time to organise various get togethers for family and friends.


A couple of weeks later Barry’s cousin Tamar and her two primary scool-aged kids, Tom and Lee, who live in Mackay,  came to visit during Queensland school holidays. They had a list of touristy things to do - the zoo, the MCG tour, Eureka Tower, St Kilda Beach and the Acland Street cake shops amongst others - some of which we did together.

Then in a couple of weeks we were off to the US again – spending  a few nights in Berkeley with Philip and Sonya , signing some documents on campus and meeting our future landlady at the house we will be renting from mid-August till late December, before heading off – me for new York to spend time with Ben, Lissy and Gemma and seeing  friends, while Barry went to Austin, Texas and then on to Mexico till we both met up to begin the Fall Semester on August 14.


As we only spent less than 5 months in Melbourne, I feel a little short-changed. There wasn’t time to do as much as I would have liked, even though we packed in lots.  Increasingly I want to spend time with my friends, who I miss so much when I am away. We caught a few operas but no live theatre, missed the major exhibitions on at the National Gallery, saw just a few movies.  I again have missed the Canto Coro choir season in its entirety, and only got to sing with the Nitzanim singers once  (plus one rehearsal). Mind you, I did get in regular exercise classes, swimming, book club and Why Is It So at U3A, while dropping out of my U3A Spanish conversation group through lack of time. Also I didn’t manage to do any Jewish Studies, as I missed the first part of the term and knew I’d miss more classes due to other activities.  I do need to ensure I get more intellectual stimulation as I am starting to notice how much less sharp I am than I was, and my memory is not as good as I’d like.  Feeling like I am temporary somehow diminishes my commitment to serious intellectual effort.  I find I give up reading long articles or other non-fiction because I feel too rushed. Maybe blogging again will help – or maybe it will be something else to avoid putting time into.  My preferred activity seems to be many games of Scrabble on the iPhone, the equivalent of many games of solitaire on the computer but more enjoyable.
Posted by Barbara at 5:53 pm

Pleased to know you are alive, presumably well. What a busy time you had in Melbourne !

Seems you are not slowing down, don't know how you find time for all those activities.