A weekend in the country


Sonya and Philip invited us to spend the weekend after Thanksgiving at their cottage in Forestville, about an hour and a half's drive from Berkeley, in the Russian River area of Sonoma County. The forecast said the rain would stop late Saturday and the next couple of days would be fine, so we chanced it (sightseeing is less than great in the pouring rain) and though it was pretty wet when we drove up there, and there were just a few more rainy episodes on the first day, Sunday was fine and Monday was brilliantly sunny. I have put some photos on Flickr - Sonya and Philip and the house; the Ferrari-Carano vineyard we visited on Sunday, which has wonderfully landscaped gardens and some sculptures dedicated to the wife of the founder; and some shots from the coastal route Philip took to drive home, enjoying the views from the cliffs above the beaches and the marina at Bodega Bay, where we stopped on the way back for clam chowder and a crab sandwich.  We had a lovely time, including a very fine dinner at The Farmhouse Inn in Forestville on Saturday
night - (you can look it up and check out the menu) at http://www.farmhouseinn.com/restaurant.html


Philip loves rhubarb so I had made a surprise rhubarb and apple crumble for him (and the rest of us had some too), and had brought up  pumpkin and leek soup from home also. Sonya had  some home made challah and a delicious cranberry relish she had made for Thanksgiving, and we had lamb cutlets and smashed potatoes, asparagus and salad on Sunday night, as well as delicious breakfasts. We really enjoyed the wine tasting and rather spectacular tasting rooms at the vineyard (where the woman who assisted us turned out to have a son and daughter-in-law teaching at universities in Brisbane) and the subsequent drive into Healdsburg, where we had lunch at one of the many restaurants in this very foodie haven. I had been thinking I had strayed from my Weight Watchers path since Chanukah - but writing this I realise I started on this deviation much earlier - starting with all the chocolate at Halloween, then Thanksgiving, etc. etc. My jeans are too tight again, and drastic action is required.    Weight Watchers has started a new plan, though the old one worked just fine for me, and even thinking about changing has rather derailed my eating from its familiar track 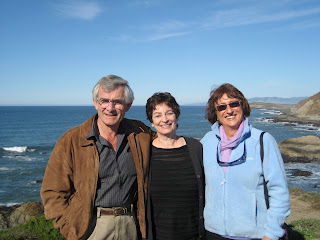