Thanksgiving and Chanukah 2009 (with recipes!) 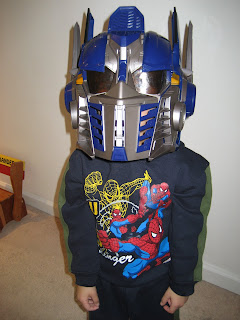 Our neighbours, whom we met for a couple of minutes on the first day we arrived and have not seen since, left a note for us inviting us to their Thanksgiving dinner. We were surprised but delighted at the gesture of friendship, and after a couple of attempts I found them at home briefly and regretfully declined, as we had decided to go to Santa Clara again, as we did last year, to spend Thanksgiving at Jackie and Bob's. I made a huge pot of pumpkin soup and we drove down in very light traffic. This was more luck than judgement, because I missed the freeway turnoff recommended by the GPS, which had told me to stay left but then expected me to get off on the right. But as it happened, we ended up bypassing the area of heavy traffic by taking the substitute route. It took us less than 2 hours to get there, and was really a very easy run. We had opted to spend the night there rather than drive back in the dark, which made for a more relaxing break given that we are still not all that comfortable with driving long distances in the US. 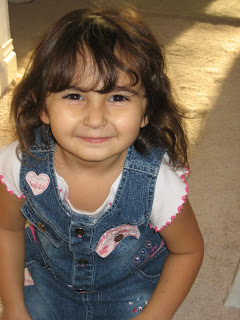 Jackie and Bob's kids, Alexander and Naomi, about 4 and 2, were sleeping when we got in, and we didn't want to be in the way, so we went for a long walk around the neighbourhood as there were no jobs for us in the well-organised kitchen. The kids seemed a lot less shy than they were last year, perhaps in general or maybe they have begun to know us. Barry in particular is pretty good with kids and he entertained them for a bit when we got back while I tried to make myself a bit useful peeling potatoes. 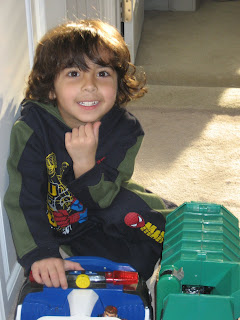 Jackie's family is Jewish, Bob's is Catholic, and as most holidays in America have some religious association, sometimes not all family members are equally comfortable celebrating each other's special days. So Thanksgiving, the one holiday which is not associated with either religious heritage, is the holiday that Bob and Jackie most enjoy hosting. Last year both sets of parents were there as well as family friends of several generations. This year, Barbara and Larry (Jackie's parents, who live in LA: Barbara is Barry's cousin, originally from London) didn't come for Thanksgiving as it was just a couple of weeks till Alexander's birthday, when they were coming up to spend a few days. But all the other friends we met last year were there again, plus some neighbours. The food was a real treat - we are not aficionados of the dishes traditionally served at Thanksgiving , but the turkey, stuffing, vegetable dishes, pumpkin and apple pies were all absolutely delicious, but subtly different from last year's we thought. Traditional but not hidebound, for sure.

Transforming a dining/living area inhabited by young kids into a festive dining area for around 16 people is quite a task. Folding trestle tables and very attractive, seasonal and sturdy disposable tablecloths and crockery make it a lot more manageable and easier to clean up. The biggest problem is where to store all the leftovers - overflow fridge and freezer space in the garage is definitely needed. After a very pleasant feast, followed by more cups of tea and chocolates, the other guests returned to their homes, the kids went to bed, and we helped clear up and restore the living area somewhat. That done, we broke out Ben and Lissy's wedding DVD and watched parts of it with Jackie and Bob , including some of the wonderful horas (the spirited Israeli dancing which went for 45 minutes) and Ben and Lissy's speeches. We then went upstairs to spend the night on the convertible sofa bed in the study/office area, and slept very soundly.

Jackie and Bob were going into San Francisco to an event at the Cow Palace the next day, so we left in the late morning after breakfast, and this time managed the journey back to Berkeley with no mistakes, again in well under two hours.

Many people go out of town for Thanksgiving, so my choir rehearsals and exercise classes missed a few sessions. But we were very conscious our time in Berkeley was drawing to a close, so we had invited Sonya and Philip and Margaret and Irv to dinner the weekend after Thanksgiving.

You might have read about my friend Sonya Hunt in a blog post from the end of 2008. I spend a lot of time with her , and we often go food shopping after exercise classes. Last year she introduced me to the Tokyo Fish Market, the Cheese Board and the Berkeley Bowl. Philip originates from the UK and renovates houses -he is a great music lover and gourmet with a very British sense of humour still. They have become really good friends, looking after Barry while I was away on the East Coast, taking care of our luggage, offering to drive us to the airport - we enjoy their company a lot. Margaret is a colleague of Barry's from the Berkeley History Department, who specialises in an earlier period of Mexican History than Barry's modern times, and has researched the lives of a lot of rebellious nuns. Her husband Irv was Professor of Japanese History at Berkeley and is retired now, though he is often around the Department and I love to listen to his tales of his childhood in New York with his Yiddish-speaking grandmother.

All of us are foodies, and I really wanted to make some of my Australian favourites, but wasn't sure I could pull it off thousands of kilometres from my usual sources and in a differently equipped kitchen. The menu was to start with some variant of my current favourite salad, with baby spinach and rocket (arugula for American readers), crumbled blue cheese, dried cranberries and fresh pomegranate seeds, and some pecans or walnuts, with a light balsamic vinaigrette, with nice crusty warm bread from the oven.

As the main course, I planned to make a version 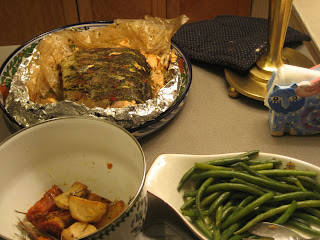 of my Thai style baked salmon, which I perfected as a festive main course for Jewish Holiday dinners over the seven years when Ben wasn't eating meat. For those occasions I would get a whole salmon, but as we were only 6 and the oven at Walnut Street is not huge, I went to Tokyo Fish Market a couple of days before our planned dinner to see what was on offer and if I could get them to prepare it for me the way I like to do it here. I selected a Canadian salmon that I could see whole and seemed to look pretty much like the Atlantic salmon from Tasmania I am most familiar with. I spent some time describing what I wanted to one of the guys there, who ended up getting a senior fish man to interpret what I was saying. Eventually we understood each other : I was apparently asking for what they know as a salmon roast from the centre of a fish , big enough for 8 slices, cut through almost to the bone on both sides but left in a single piece. I arranged to have it ready for me so I could collect it (and some ice) on the day I needed it, right after my exercise class. I make a kind of pesto with Asian herbs, and stuff it between the slices, wrap in baking paper and foil, and bake it in the oven: when you unwrap it from the oven, the aroma of Thailand is fantastic. I am including the recipe below. As the oven is on anyway, it makes sense to roast vegetable as an accompaniment: there seems to be less variety in potatoes in the US than at home, but I have worked out which ones roast OK, and combined them with sweet potatoes, rosemary and garlic, with steamed Blue-Lake beans as the other vegetable. I am not sure at which point I though to snap this picture: the first few slices of salmon may be gone and many of the veggies, too, apparently A food stylist would have come in handy! Here is my completely original recipe for a whole salmon:

§ 1-2 bunches of coriander, washed and cleaned carefully, including roots if nice, all of leaves, some of stalks.

§ A couple or more fat cloves of garlic, cut into pieces

§ A knob of ginger, cut into pieces

§ Some lemongrass cut into slices, use the inside parts mostly and bash it with your cleaver or it will be too fibrous

§ If you want, some Vietnamese mint or Thai Basil leaves (I only add these if I happen to have them on hand)

§ 2-4 small red chillies, seeds and veins removed, depending on how much heat you want

§ just a little bit of oil, light olive, peanut or canola, not strongly flavoured, to assist in the whizzing.


Last year when we were living in Santa Barbara Road, I had borrowed a loose bottomed tart pan from our neighbour Janet to make the raspberry marzipan tart that we love. I knew she'd been on a trip to India but she was home now, so I called her up and asked to borrow it again (and also to borrow their air bed a few days later for Ben and Lissy's visit). In fact Janet said she had not used the pan since I last borrowed it, and told me about the one beautiful fruit tart she had made in it and placed on top of the fridge for safe keeping , out of reach of pets and sticky fingers, only to have someone who of course had no idea it was up there open the fridge door and lose the whole thing as it tumbled to the floor. So I made the raspberry marzipan tart again, a day ahead, and made a secure space for it in the fridge. You can see the left over part of it in the photo below - the dinner guests share star billing! (remember, you can click on the photos to enlarge them) 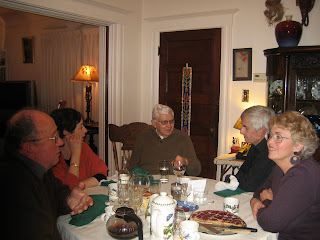 And here is that recipe, modified by me over time from one I originally cut out of the LA Times about 25 years ago, when we were living in San Diego where Barry was spending a sabbatical as a Research Fellow at UCSD.

In a small bowl, cream butter with sugar and almond essence until light and fluffy. Add eggs, 1 at a time, beating well after each addition. Fold in ground almonds.

Combine icing sugar and lemon juice to a consistency that will drizzle thickly from a teaspoon – (this probably makes too much, but add more lemon juice and add to a fruit salad!)