Berkeley in the Fall

I got back from the East Coast to a very busy time, and to mostly lovely weather.  October 1 is Barry's birthday, and he had booked us into a very well reviewed "Cat on  Hot Tin Roof" and a  pre-show dinner at a fancy seafood restaurant in San Francisco for the day after, a Saturday.  But on Friday evening he got a call from the theatre saying the performance was cancelled because the lead actor had been in an accident, and although they refunded our tickets, we were left on Friday evening trying to find seats for the next evening to a show we both fancied. We tried various performances we liked the sound of, but couldn't find anything available, so decided to try something different, a  Magic Bus Tour through space and time  back to San Francisco in the '60's.  We thought it might be something like one of Rod Quantock's shows (a Melbourne reference, never mind, it can't be explained), but basically it was a bus which picked us up in Union Square which had blinds on the window serving as projection screens.  Films (a collage of historical documentary footage, TV interviews and other linking commentary) were projected onto these and while the bus was in transit and when the bus arrived at a destination of interest, up went the blinds and we watched the streetscapes to a recorded commentary.  At one stage the hostess on the bus donned a costume for a few minutes. There was footage of  the Summer of Love, the psychedelic shop fronts of  Haight Ashbury,  happenings in Golden Gate Park, the British Invasion and the impact of Rock'N'Roll on the generation coming of age in the 60's, the civil rights movement, drug culture - though we also looked at at important economic institutions in the Financial District, Chinatown, sites of demos etc. The  several themes - the advent of youth culture, the generation gap, the music, the anti-Vietnam War, anti-draft movement, the psychedelic experience were explored from different angles and it was all quite well done. The written programmes handed out were in 3D as was the paint job inside the bus, but we had to take our special specs off to watch the video as that wasn't.

This was a mid afternoon trip, and so we had a little time to kill before dinner at Farallon, which we wasted wandering about, though it was quite chilly. San Francisco was very much cooler than Berkeley that day. With no play to go to, we had longer to spend over the meal than we had planned, so we told them when we arrived and they seated us in a different area where we had a great view of everything going on and were able to enjoy the meal with no sense of urgency or rush. 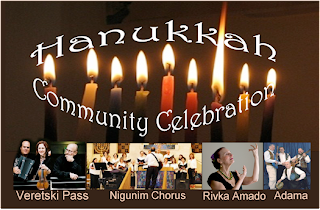 I had missed the first rehearsal of my choir (the East Bay Jewish Folk Chorus), which was on my birthday while I was in NYC, but started my season by going to the rehearsal at the JCC on Monday night.  As always, it was sheer pleasure to be singing and seeing my friends again for the new season.  I had listened in advance to some of the music, which Achi, the Director,  posts on a web site so we can download the scores and the MP3s of our parts.  I  was already a bit familiar with a couple of the Hebrew songs and one of the Yiddish ones, Lomir Ale in Eynem, which it seems to me is always sung at Jewish weddings and Barmitzvahs in Melbourne - though none of the other singers had ever heard it, so presumably it is a lot less popular in California! We have a couple of concerts scheduled for the beginning of Hanukkah, and Barry thinks Tom Lehrer's  "I'm Spending Hanukkah in Santa Monica" will bring the house down. Here is a youtube of the song - and I think Achi's  four part choral arrangement will sound pretty good.
http://www.youtube.com/watch?v=VSCmZU0eFJg&feature=related


As we each had periods when we knew we'd be travelling, we had booked operas and theatre to fit around the absences, which at time  perhaps led to a greater concentration of arts than is ideal.  In this week, we had an opera on Tuesday evening (a lovely performance of the Marriage of Figaro at the SF Opera House, see the link below:

The conductor, Nicola Luisotti, took it all at breakneck speed, and the sets looked just a little bit tired, but I always enjoy this Mozart romp and the singers pretty much did it justice without being spectacular. The subscription department rings you up and very charming young men talk you through the options for making up your season, and though we decided it was too expensive and we wouldn't subscribe this year, we have ended up with even more expensive seats this year, having vowed not to go back to the still expensive but very uncomfortable seats we have had in the past two years - no leg room for us, and we're not that tall! At least in these seats we are comfortable.


Then on Thursday night we went back into San Francisco's Civic Centre area to a Symphony concert, the first half celebrating Latin American composers Revueltas, Villa-Lobos and Varese, the second half Beethoven's 7th. The Varese piece, Ameriques, was scored for a very large orchestra indeed, including nine percussionists, one of who plays both a siren and sleigh bells. I quote from the programme:

In Music Since 1900 , the encyclopaedist Nicolas Slonimsky, famous for his ability to compress much meaning into few  words, summed up Ameriques by remarking that it was "titled in the plural to embrace all Americas, abstract and concrete, present and future, scored for a huge orchestra and set in dissonant harmonic counterpoint built of functional thematic molecules, proceeding by successive crystallizations in the sonorous mass of organized sound."

The audience at its premiere in 1926 certainly wouldn't have expected to hear anything like this at a symphony concert, and as I hadn't looked at the programme in advance, nor did I, but I liked it. Michael Tilson Thomas (or MTT as he is generally referred to), the director of the SF Symphony, conducted Beethoven 7 at a cracking pace, but maybe not as fast as I expected from having heard him before. It is a lovely work and I hear new things in it every time I hear it performed, however familiar it is.

Last time I mentioned the opera neighbourhood, I may have posted a photo of the electric car share parking spots.  In our very own street there are now two electric cars, both seem to belong to the same house - the smaller one is advertised for sale, and is a sweet little thing with lightweight mesh seats which caught my eye as it was very badly parked near a busy corner. Lately I have seen it parked in the carport where you can see the larger car being charged.


Our young cousin on the Marsh side, Stephanie, recently went on a Birthright trip to Israel and met a new friend there who lives in San Francisco.  She was visiting Ilana for a long weekend and came to spend Friday with us in Berkeley.  We had breakfast together, then Barry gave her a campus tour while I went off to my exercise class and to give blood at the Albany Y (the post-donation snacks at the Melbourne Blood Bank are much healthier, and the staff are friendlier too, I must say). Then I picked her up and we had lunch at home and spent a couple of hours getting to know each other a bit ( we last met when Steph was a teenager - now she is finishing off  her MA in Arizona). We headed off to get some sea air, in short supply in Phoenix, with a walk out along the fishing pier and through the Berkeley Marina, then went off to College Avenue to look at the shops. We parked near the famous ice-cream shop Ici, and ogled the queue along the street and the flavours of the day posted on the lamp post outside (see shot of this I took with the iPhone) when our phones started ringing.

We got a series of calls from Barry (who had been into San Francisco to meet a colleague) and  Ilana, who were each coming in from San Francisco to join us for dinner and a show. We left the Elmwood area where we had been wandering and picked them both up from the downtown Berkeley BART station (and in all this gallivanting, I didn't get lost even once - very proud of myself!) We ate at one of Barry's favourite restaurants, Adagia, across the road from campus, and walked down for the show afterwards. A few days earlier Barry had spotted that Circus Oz was performing at Zellerbach Hall on the UCB campus, and we had booked tickets because we thought it would be a really different experience for the girls in particular.  And it was - really a lot of fun, amazing feats of balance, tumbling, juggling, music etc. Some of the dialogue  or commentary was a bit hard for us to hear, let alone understand - and we speak the language - but the words were not the main source of entertainment.  The girls seemed to enjoy it and we all laughed a lot, and gasped a fair bit too. Afterwards we dropped them at the BART station to return to San Francisco, after a very full day all around.
Lincoln and Nina, some neighbours that Sally and Monica had briefly introduced us to, invited us over to their house for drinks on Saturday evening, which was extremely pleasant: sitting on their deck  a few houses higher up the same hill we're on towards sunset, looking at the magnificent view, discovering interests in common and listening to the deer crashing about in the woods below. Lincoln is an archivist, writer  and collector of political posters.  He has a studio with great capabilities for reproducing and digitising images - this is another field that has been transformed by the advent of the Internet and all the digital technologies which are enabling the preservation of what are, after all, essentially ephemera, but which tell so much about popular culture and popular movements all over the world.  He highlighted how in the post war years in the USA, with McCarthyism and the stultifying conservatism of those years, there was virtually no political poster making at all, and that it was with the rise of youth culture and music that poster art came roaring back.  Reminded me of our mystery bus tour!
Posted by Barbara at 2:20 pm