On the Saturday of the Labour Day weekend, we decided to catch another of the San Francisco City Guide walking tours.  Most on that day started a bit early for us, but with a 2PM start we figured we could have lunch in San Francisco first.  We parked the car at North Berkeley BART and caught a train just as it was leaving , which  turned out to be the wrong one. But we didn't notice at first because a man got on with a very big but clean and well-groomed short-haired dog, who leapt up to sit with his owner on the seat beside us.  The dog looked kind of worried, and had his large head resting on the guy's lap - the guy explained the seat really wasn't big enough for him, which we could certainly see!  They were on their way to a dog show and we were so fascinated by the goings on as the several kids with the man (who were relegated to other seats) were dispatched to check the maps and practised various dance moves in the aisles that we didn't watch the station names till we had gone beyond the last cross-platform transfer point. As is often the case, we couldn't make out what was being broadcast - the sound system or else the drivers' diction is unclear on BART trains. When we noticed eventually we got off, waited for a train in the other direction and retraced our steps.

We got off at Civic Centre, near the grand public buildings including the Opera House, Public Library, City Hall and Symphony Hall, and walked from there. We checked out a San Francisco art collection at the library, bought a couple of mysteries at $2 for my plane trip, had a coffee and checked out their loos.  One of the first things I noticed was that on the street where I have always noticed the City Car Share and ZipCar  parking slots, there is now an electric car slot:


We didn't wait till we got to Japantown to have a sushi bento lunch, which probably was a mistake as there were so many eateries there which looked more interesting than the place we chose.

The themes of the walk were urban renewal and racism, as shown in the shameful history of the forced expulsion of Japanese Americans, including citizens, to concentration camps, and the confiscation of their property.  We began at the Peace Plaza where the pagoda, designed by Japanese architect Yoshiro Taniguchi, was given to Japantown by the people of Osaka, San Francisco's sister city in Japan.It is sited between 3 large shopping malls built in the Japanese style in the 70's. 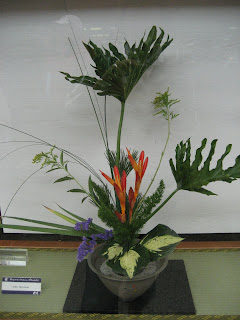 The malls were quite crowded.   Currently some planners want to demolish them as they are older, inward looking with no street frontage, and not in the style currently favoured for malls.  We, as always, enjoyed looking at the local branches of the famed 100Yen shops that Barry loves in Japan, only the common price was $1.50 rather than the $1 /100Yen price he was expecting (he was outraged by this!). The stores and eateries were very busy, and though very few Japanese ever returned to this district, where they largely lived before WW2, they do come to this area for the shopping and the cultural institutions. Many of the stores had Japanese chachkes on sale, and this window display was one of the flower arrangements of one shop-front where they teach Ikebana.  Other shop-fronts advertised classes in dance, Japanese drumming, and various social activities for both young and older community members interested in aspects of Japanese culture.


Rather than tell you all about it here, I will refer you to the Wikipedia entry about Japantown, aka Little Osaka, where you can read a brief entry about the history of the neighbourhood, the internment etc.  I was reminded of the efforts in Melbourne to save Carlton from demolition after it was condemned by town planners as unsanitary and overcrowded - large parts of Japantown had lots of wooden Victorian houses which were torn down, leaving only a few, which by now have mostly been restored as the area is gentrified (sound familiar to Melbourne residents?)  The planners who want to redevelop the shopping centres are encountering significant local opposition.

These shots were taken near the corner shown below.  Buchanan Street is named for the US president widely regarded as the worst ever - but at this corner you can see the challenger!  (You may need to enlarge the picture to see it clearly: click on the image to do this.  The Bush the street is named for is indeed a forebear of both Presidents Bush.)

One of the other little aspects of local history our guide covered was the story of Mary Ellen Pleasant, another of the colourful characters that abounded in 19th Century San Francisco.  She was an African American woman, a former slave who could pass as white, but later in life changed her official racial designation from White to Black, and who had a long association with helping slaves escape via the Underground Railroad.  When she got to San Francisco after her first husband died, she ran boarding houses and restaurants for businessmen, listened to their tips, invested in the share market based on this inside information, and made a fortune.  Later she was part of a somewhat unusual household with a man officially married to someone else, and was the target of a great deal of vilification. She could be considered the Mother of Civil Rights, as she fought and won several legal battles including one to desegregate public transport in San Francisco, many decades before Rosa Parks. Her Wikipedia entry is pretty bare bones, but there are other sites with more information is you Google her name.  We stopped at this plaque outside her former  mansion, amidst a row of huge eucalypts she planted, and heard her life story in brief.