Moctezuma Exhibition at the Templo Mayor

Emiliano Melgar, son of Ricardo and Hilda, and brother of Dahil, is a forensic archaeologist who works at the Templo Mayo right in the heart of Mexico City. He offered us a private conducted tour of the exhibition there on the life and times of Moctezuma II, the last indigenous ruler of the  Aztec empire, who thought that Cortes might be a god, and was killed and his empire lost during the Spanish Conquest. We were joined by Dahil and her boyfriend Jose-Luis,  and a Japanese colleague of Emiliano's. 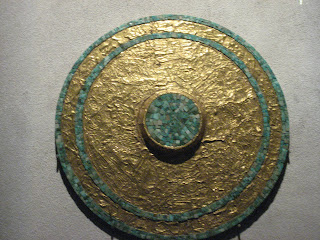 The exhibition was originally shown at the British Museum, and the version on show in Mexico is supplemented by extra artefacts and materials.  Quoting from the link below:

The exhibition tells the story of Moctezuma II, the last elected ruler of the Aztecs, more correctly known now as the Mexica. From 1502 until 1520 he presided over a large empire embracing much of what is today central Mexico. This exhibition examines his life, reign and controversial death during the Spanish conquest.  The Spanish arrived on Mexican shores in 1519, led by Hernan Cortes. They were initially well received in the Aztec capital, but distrust and violence ensued. Moctezuma was captured and met his death shortly afterwards. Overcoming resistance, the Spanish went on to conquer his empire. Moctezuma’s life and dramatic death are explained through objects ranging, from sculpture, gold and mosaic items to codices and European paintings. The objects are drawn from Mexican, European, US collections and the British Museum’s own collection.

No flash is allowed and I am not much of a photographer under these circumstances, but here are a few photos that I took. I also took pictures of some of the captions in English to remind me of what it was about. and have included most of these in the web album, so you can look at them there singly or as a slide show if you are interested.. 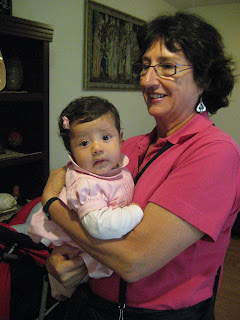 After our tour, we went back to Emiliano's apartment to meet his wife Reyna (also an archaeologist) and their cute baby. Dahil lives in a smaller apartment in the same building, and she had invited us to lunch.  Hilda and Ricardo met us there and after what I considered to be a sensible and delicious lunch based around salad, fruit, cold cuts and some grilled nopales and  peppers,  we went downstairs and next door to a restaurant which is part of a school of gastronomy across the road, where students train in the kitchens and as waiters, apparently for some "real" lunch. I had already eaten handsomely so just ordered a cup of tea, Barry had some apple pie, while the others, who had only nibbled at Dahil's, being more aware than we were of the plans for the meal,  ordered serious food. The baby was an angel for the entire time, not one grizzle even though she had had a tummy upset and they thought she might still be unwell.
Posted by Barbara at 10:41 pm