Last Opera and a Barmitzvah

After Maguie left us on Monday evening, we still had one more opera on our subscription, on Tuesday night: Salome. We took BART downtown in the evening and just missed the first few minutes of the the pre-show talk this time. It is a very confronting opera - seeing Salome dance about with the bloody head of Jokanan (John the Baptist) is not to everyone's taste. I hadn't realised the work was based on a play by Oscar Wilde. There is more than the average number of nasty characters - Herod is horrid, Herodias is not a nice wife and mother, Salome is totally depraved - and not a lot of decent types, one of whom kills himself quite early. We enjoyed it, however - powerful dramatic music and very good performances again. The dance of the seven veils was extremely well-produced, with acres of silk employed to great advantage. One odd thing was the costuming of the Jews, who were in current-day Chassidic garb. The roles have the several Jewish representatives of different sects disputing the meaning of texts while ignoring what was happening in the land, and I can understand this from both contemporary and historical perspectives. But the costumes were totally anachronistic, in an opera otherwise consistently costumed in its own period, so I couldn't help wondering why they chose to dress these characters as if they had just walked onto the set from Crown Heights.

You can hear excerpts and see the cast list, etc. at 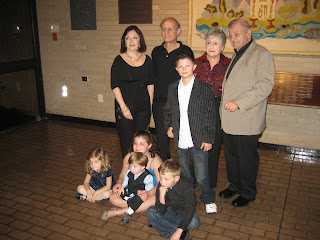 It was not our initial plan to have so many operas clustered together. We had to change the dates of our initial subscription because of our plan to go east the following weekend (which was Halloween, so we missed being Trick or Treated in Berkeley) once again to attend the Barmitzvah of Nate Gruber, Lissy's nephew, in Rockville, Maryland (close to Washington DC). Barry hadn't seen Ben and Lissy on this trip and figured this was the only time he could fit in a trip to their territory on the East Coast, so we flew off on Friday morning and flew home on Sunday.


We had hoped to catch up with Carmela (an old friend from my NYC Women's Group) and husband John while in the DC area, but there was a medical emergency in Carmela's family so she had gone off to New York before we came in. John was dropping his niece and family off at the airport around the time we got in, so we manged to catch up briefly just with him - he met us at the airport and drove us to our hotel (taking the scenic route!). He spent the journey discussing with Barry some details of his family history - his English grandfather and great uncle had been involved in the mining industry in Mexico in the 19th and early 20th Century. He has some fascinating family letters from this period and they discussed what institutions might be interested in these, and what sources could shed further light on this episode. I found the conversation quite fascinating. We arrived at our hotel before Ben did on Friday evening, and managed to catch up with them and other members of Lissy's family who were staying at the same hotel later in the evening. The photo above shows Nate's four grandparents, with Nate standing and his siblings and the Morcheles first cousins sitting on the floor. 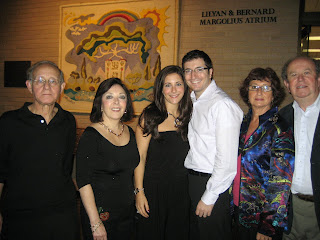 We went to Shule on Saturday for the Barmitzvah, where Nate did a great job, sharing the parsha with a Batmitzvah girl, in a very full Synagogue close to the hotel. There was a lavish kiddush and much sitting around with the family in the Shule hall afterwards, then we went back to the hotel and got to spend some time with Ben and Lissy, finally choosing a selection of wedding photos for our album, as they had brought the full set of proofs with them. There were so many gorgeous photos and it was hard to choose a couple of dozen . I had found selecting them on the web, the initial plan, quite difficult: the site allowed us to compare two photos at a time, but where there were 4 or 5 similar to choose amongst, I would prefer A to B, and B to C and D to C, but then find I liked C better than A - going round in circles. Looking at the proofs was much easier! This photo shows Barry and me with Ben and Lissy and Barbara and Bernard (Lissy's parents) at the Barmitzvah.

I managed to get in a swim on the hotel pool before getting showered and dressed for the Barmitzvah party in the evening (Ben got in just as I got out, having worked out in the hotel gym session while I was swimming - I realised I haven't seen him swim since early adolescence, it is something I do a lot but have never really done with him except on long-ago family holidays. His freestyle has certainly improved - the triathlon training he did earlier in the year no doubt contributed!) 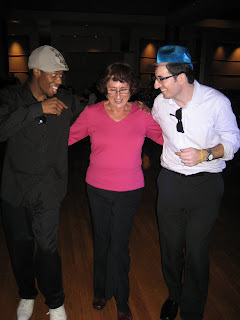 The theme of the Barmitzvah party was a casino and games, of which there were many, and although I didn't get around to the gaming tables, I did do the parent and child dance with Ben (there are incriminating photos). There was a person encouraging the dancers as well as the DJ, so there are some shots of me making a fool of myself with him, too!

I posted all the photos from my camera (mostly taken by Barry) on Picasa, so you can have a quick browse. It is lovely to have acquired such an extended family in the US, and we feel very privileged to now be included in such family simchas. We have only met Hillary and Brian (Nate's parents a few times - Hillary is Lissy's oldest sister, more than 10 years older), and we would not have expected to be invited as a matter of course, so we did appreciate the invitation and were glad to be able to attend. And we very much enjoyed the brunch at their house on Sunday, which gave us a
bit more time to chat with the family and meet a few more of them, including a cousin from the west coast who gave us a lift to the airport.

It took ages (and 2 attempts) on a somewhat slow connection to download the few seconds of video here and it is actually awful, but after all the time I had to defer going to bed till it loaded, I am leaving it in: you will see Ben and Lissy dancing with Kendall, Lissy's young cousin, who is dynamite on the dance floor!