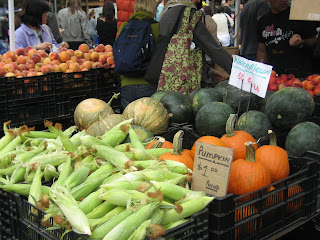 Seasonal produce on display at the Farmers' Market in Ossining, New York, Fall 2009. 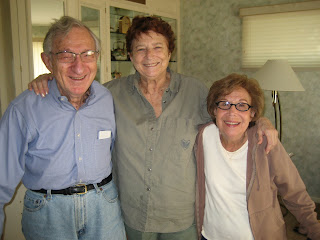 In what is becoming routine when we are in this hemisphere, I caught up with my family for the Jewish High Holidays . This means visiting Cleveland, where my father's two youngest siblings live, and Baltimore, where my brother and his wife and his daughter, her husband and her 7 children live. The activities are pretty much as before, in last year's blog entry for this time of year as well as entries from 2 years ago. In fact my brother referred me to my own honey cake recipe which I had forgotten that I had posted here two years ago when I started the honey-cake baking marathon, if you want it check entries from late September 2007. I printed it out from the blog for Miriam and me to follow when we set about making one at their house for the visiting family to eat at Sukkot.
So I got to Cleveland a few days before Rosh Hashanah (Jewish New Year), and had a lovely time in the kitchen with Aunt Florence baking honey cakes and figuring out a few different vegetable dishes to cook, including roast veggies (potatoes, sweet potatoes, multi-coloured peppers, red onions and asparagus). We arranged them all beautifully for Yomtov meals after due consideration of what would fit in the oven or microwave and what would look gorgeous on which platters. And of course there were heaps so there were leftovers to turn into a roast veggie salad the next day. There was also a bit of driving about with Uncle Henry to collect prepared food from the different stores they had been ordered from (and Aunt Flo orders the Challot for the Shule as well so there were a lot of those to be collected as well).

Yomtov dinner the first night of Rosh Hashanah, also Shabbat, was at first cousin Pam and Stan's. Aunt Flo and I had prepared some of the food to assist Pam, who is a special ed teacher and as a working woman has less time than we retirees did, but she had worked her magic with the chicken soup and kneidlach (aka Matzo Balls), which were fluffy and delicious. I am a failure on the kneidllach front. Everyone I know who makes good kneidlach gives me her never-fail recipe (and its antecedents, mother/ mother-in-law/grandma/ aunt etc) and mine either fall apart or come out hard, which was the style my English mother made - a fluffy kneidl is a revelation to me. My son Ben says he makes fluffy kneidlach using the packet instructions from a mix , but whether I use a mix or make them from scratch, they are never anywhere near as fluffy as those they make in the US. Maybe my hands are too cold or too warm? In between, we visited Aunt Lil, and cousins Fran and Jerry, and Michelle and Jeffrey and his daughter Leah came by at various times for a quick visit too. (Photo above shows Uncle Henry, first cousin Fran, and Aunt Flo.)

Each day I managed to fit in a walk: about 12 minutes' walk along Richmond Road from where my uncle and aunt live, there is a recently constructed linear park that runs along Shaker Boulevard. There is a constructed wetland and a walking/cycling/running track weaving around it, and I am always amused to see people driving up with their dogs to walk them. In all the many times I have walked along Richmond Road to this park, I don't think I have ever encountered a pedestrian other than a few school kids walking home the few doors from their bus stop. though it is a very pleasant area. Oddly (or maybe not so odd given my sense of direction) I had not realised that the side entrance to this park (and the car park situated by the picnic facilities and toilet block) is on the street where Fran and Jerry live. This year I discovered this because I took a walk with them (Jerry is in wheel chair and the access is quite good) and we were right there. If I do the complete circuit on both sides of Richmond Road and walk back home, it takes a bit over an hour and is just short of 10,000 steps (maybe around 7 km) . Additionally I went for a swim with Aunt Flo while she had her aqua therapy class. The JCC's indoor pool was being renovated, and they had kept their outdoor pool, which they normally close when schools resume early in September, open. It was a bright day and very sunny, but there was a stiff breeze. I was fine, doing laps the whole time so mostly submerged, but I think Aunt Flo was pretty brave as she was half out of the water most of the time. I suggested she get one of those cover up T-shirt style tops (we call them a rash suit at home, and in fact a toddler having a lesson was wearing one) that would keep her a lot warmer, even in the indoor pool. Kids wear them at home for UV protection at the beach as well as to protect their skin if they are dumped by the waves, but I don't see anyone wearing them in the pool at Berkeley (maybe I should get one myself for our last few weeks here - it can't keep being so warm and I do swim in an outdoor pool!)

And again I didn't get to the Rock and Roll Museum - I absolutely must get there again next time I am in Cleveland. I did attend a lot of synagogue services, always very enjoyable at their Conservative Temple as the cantor has a gorgeous voice and the Yomtov choir (of which Uncle Henry is a member) blends with him beautifully. The congregation loves to sing along, and this year a routine involving a Mexican wave travelled right across the sanctuary during the chorus of one of the piyutim (a piyut is a hymn usually extolling the virtues of Hashem, often an acrostic each line of which begins with a letter of the Hebrew Alphabet, sometimes in reverse order) sung to a Chasidic tune, "V'yitnu lecha keter melucha" with lots of "ya da dai's". Apparently some of the more po-faced members of the Worship Committee thought it a bit frivolous when one large and high-spritied family started it off last year, and before yomtov brought it up as something that maybe should be discouraged - but the Rabbi came down on the side of participation and enjoyment and in fact this year continued the Mexican Wave across from the congregation to himself and the President, and others seated on the bimah joined in too. After many solemn prayers on Yom Kippur this joyful melody breaks the tension and the leaping up and down oxygenated our blood to carry us through the rest of the service awake and somewhat refreshed! 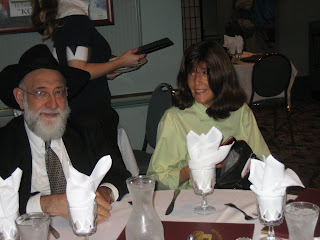 From Cleveland I flew to Baltimore for a couple of days, and went swimming with Miriam at the JCC, where, though I don't think there is a formal agreement for reciprocity, showing my membership of the Berkeley JCC got me a couple of day's passes. It is a very good deal, as the JCC here in Berkeley is a cultural centre more than a sporting facility and doesn't have pools, gyms etc. , and membership is much cheaper than at places like the Baltimore or NYC JCCs. One evening we also went out to dinner at the Royal, the Iranian Glatt Kosher Chinese American restaurant that has also become a standard event when I visit. The kids really enjoyed the buffet, especially the chicken wings, and it is a pleasure to see them eat! This picture shows my brother Yaacov and his wife, Miriam, at the restaurant, where Yaacov always orders chicken-fried steak. Australians please note, this seems to be a thin piece of steak breaded and deep-fried like KFC. I haven't studied the matter carefully, so am not sure how different this wold be from a schnitzel made from somewhat aged veal. Miriam had a grilled chicken salad, most of which she took home, as the servings are very large indeed. 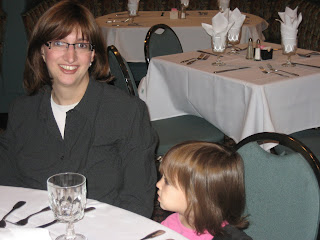 For my niece Esther (pictured with her youngest daughter, Leah), not having to prepare and serve a meal for her large family and, better yet, no washing up, is a real treat, even if no food were involved. Similarly for Miriam. In a strictly kosher household there is a lot more fuss over food. For meal preparation and service, tablecloths are changed or covered over as well as ensuring the correct choice amongst multiple sets of cookware, implements, cutlery and crockery needed, trips to the extra fridges or storage places downstairs , different sinks and dishwashers, quite apart from the rituals of hand washing, ensuring the appropriate blessings are made before eating each type of food, the grace after meals etc etc. It is a very different experience to a meal in a secular household, except in most households it still seems that most of the burden (or pleasure if you see it that way) falls upon the shoulders of women. I certainly need to add that this is my take on things, the observant women in my family do not complain at all about it
Posted by Barbara at 10:54 pm