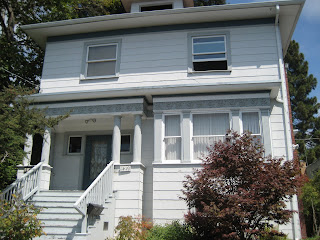 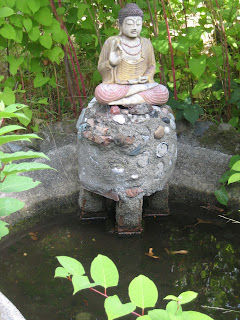 Well, here we are again. Barry was invited back for another semester as a visiting professor by the History Department at UC Berkeley. First, we established that he would be paid money rather than IOUs . California is a bit short of money these days, so the Governator instituted a system of IOUs for certain government payments, and as Berkeley is a state university, we thought we had better check before going ahead with our plans to return. This year we are renting the ground floor of an early 20th Century house on Walnut Street (street view above, a bit of the garden beside). We are directly across the road from the Jewish Community Centre, one block from the Gourmet Ghetto, close to supermarkets and just a 15-minute walk from the Cal campus. We don't have the space, magnificent views and wonderful veggie garden of the house on Santa Barbara Road we rented last year, but we are much closer to BART (the rapid transit system which takes us into San Francisco), downtown Berkeley and all it has to offer, and we do have a cat, Chiquita (see below) for company. 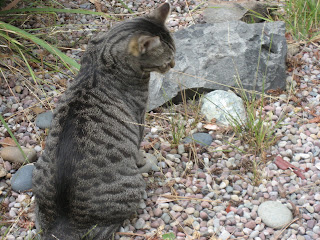 The house is pretty cluttered and we feel very much at home, but one drawback is the absence of a dishwasher. There is a nice garden but not so full of edible things as the garden I so enjoyed last year. There is a Buddha and a small pond, but I couldn't get Chiquita to keep still so I could get her in the same picture.

Thursday afternoons the Berkeley organic Farmer's Market sets up one block away. I just did a quick swing through and bought some fish, but though I took my camera I completely forgot to take any photos - bountiful displays of fresh fragrant produce will do that to me! A short while later after Barry returned from work I went back to the market with him and got him to pose with some tomatoes. 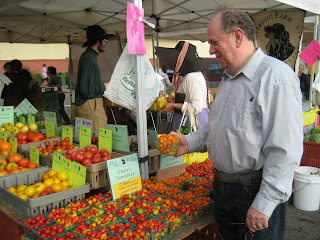 So far I haven't been to the Berkeley Bowl, the nearest thing to Vic Market here- there is a new branch now as well as the old one, and I will be going in the next couple of days. The prices at the Farmer's Market are a bit exorbitant, though the quality is very good - I am hoping the Bowl will be more reasonable and also have very high quality produce. The supermarkets have variable quality stuff, but if you choose carefully you can do well. By the time I multiply prices by 2 1/4 (to convert from lbs to Kilos) and add 25% for currency conversion, the prices seem roughly comparable to prices at home. Notably, chicken is much cheaper here and turkey, which we don't see much at home, seems relatively cheap too. 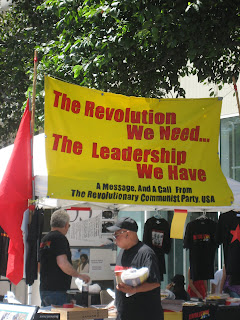 The real bargains were to be had in Oakland Chinatown - the exhibition we had planned to see in Oakland was closed on the weekend, so at a loose end in Oakland we went for a wander in Chinatown instead, and bought a few sauces, snowpeas and ginger - didn't really want to cart peaches about with us, even at 80c a pound! We chose a Vietnamese Pho place for lunch, inviting a young couple we had been speaking to in the queue to share our table with us. They were both doctors in the Stanford area, and were interesting company. We even debated the health care issues - for non-Americans, the debate is really weird - where else would they characterise the provision of universal health care as communist (though some say fascist, or too expensive and requiring an increase in taxation, and defend their system as the best in the world, while it is clearly the most expensive in the world and serious illness bankrupts many. There are 48 million Americans without any health insurance, it seems, and most people get their cover through their employer, and lose it when they lose their job - and many small employers don't provide it and many low-wage workers, the working poor, don't qualify for cover. Meanwhile, some genuine communists actually had a table at the nearby Oakland Art and Soul street fair : I was so taken by this unlikely sight that I took a photo. 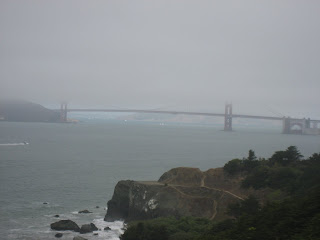 On Saturday we took another walking tour, this time of Adolf Sutro's estate at the very western end of San Francisco, known as Land's End. He is yet another colourful character amongst the many in SF's history, but little is left of his railroad, magnificent indoor swimming baths and indeed his estate. After the tour was over we walked on a bit along a path past the USS San Francisco memorial (dedicated to the ship that was lost in Guadalcanal during WWII. The path leads to one end of the Golden Gate Bridge, and I'd have liked to walk all the way (less than 2 miles) but couldn't convince Barry. It was very blustery and quite chilly, though I took a photo of the bridge which shows its top lost in fog but maybe you can see how there is blue water and sunshine on the far side, looking east back to Berkeley!
Other things we have done: saw "Julie and Julia", the movie about famous US chef Julia Child, in which Meryl Streep has a wonderful time pretending to be 6ft 2 , and this afternoon we saw a documentary entitled "Yoohoo Mrs Goldberg" about Gertrude Berg, who wrote and starred in "The Goldbergs", the first sitcom on US TV, which followed on from her very successful radio serial in which she portrayed the mother of an immigrant Jewish family - it ran from the Depression through the '50s, but the TV programme was basically killed by McCarthyism, which got the actor who played her husband (Philip Loeb) onto the Black List and the show never really recovered. We had never heard of her but she sounds like a most amazing character.
I tried out the downtown Berkeley YMCA, which has a good pool with a spa and better hours than the Uni pools, but decided I'd prefer to rejoin the Rec Centre on campus so I can swim in the outdoor pool - I think I must have got hooked on outdoor swimming. I also joined a pedometer programme they have going, but so far have been using my own pedometer rather than the one I can pick up at the Rec Centre as part of the programme. I have been getting in my 10,000 steps most days, after a long break in my time at home in Melbourne when Jesse, my preferred walking companion, was unable to manage long walks in the last months of his life. I have also been going to the Albany Y senior's exercise class 3 times a week with Sonya, so I hope to get off a few kilos over the next couple of months. Time to post this and watch some telly!

Welcome back to Barbara's travel blog. As usual, full of details - where to start to comment?

I will never again say the words United States and dinosaur and communist in the one sentence.

Re the walking tours: I have only one comment: I wanna come too!!!!!!!

Am finding the political context re the controversial proposed changes to the health system pretty interesting.

Love to Chiquita and tell her from me she is one lucky cat to have such cat-oriented cating-caring carers.