San Francisco Opera and a Walking Tour of the Castro 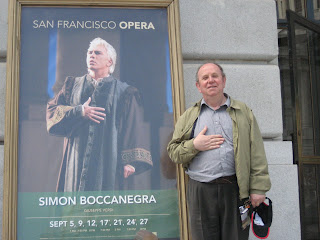 The photo above is of Barry in front of the SF Opera, with a poster from the performance of Simon Boccanegra that we saw in September. The opera itself is not Verdi's most enthralling, but it was an excellent production with great singing, and the second and third acts succeeded in wringing the usual opera tear or two out of me. We were sitting up in the gods, a lot further from the action than we usually sit in the State Theatre in Melbourne, so that possibly lowered the impact.

When we go into San Francisco for a matinee performance of the Opera or some other afternoon activity, we try to fit in a morning guided walking tour of some area of the city. We came across a brochure for these tours at the airport, and are working our way through them, though in just 5 months of occasional weekends in San Francisco, we won't be able to do all the ones that we fancy. We choose partly on timing, as so many of them seem very interesting. The guides go through hours of training and all three we have encountered have seemed credible and very knowledgeable on the tours we have taken. So we are now great fans of these free tours. Anyone planning a visit should check out their website, http://www.sfcityguides.org/ , to see the range on offer. When Ben and Lissy come to visit in a couple of weeks, we hope to do one with them also. 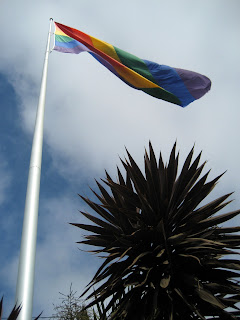 On the day of this matinee we chose the tour of the Castro District. As the guide said as we looked at the large Catholic church and heard its history, this is "the gayest parish west of the Vatican." We started at Harvey Milk Plaza under the large rainbow Gay Pride flag, and heard how the original design had included a band of hot pink, but flag makers couldn't produce the colour, so the design had been modified. We ambled about the district, seeing a monument to the homosexuals who had been killed during the Holocaust (see it on my Picasa album whose link is given below: it is a series of grey pillars) and our architecturally savvy guide took us on a specific route where she showed us examples of the various styles of Victorian and Edwardian houses, giving us their names and distinguishing features. It is now about a month since this trip and I have forgotten many of the details, but the styles do not align exactly with our Melbourne versions. Although some street frontages are under local preservation orders, our much vaunted heritage colours, burgundy, dark green etc., barely appeared in the paint jobs, they seem to be able to paint them any shade they fancy. If you are interested, take a look at the album on Picasa: you'll see shades of beige but also bright pink and blue as well as the yellow on I've shown here. We were shown typical designs by well-known architects, like the sunburst on this one, which predated Art Deco by several decades. One of the shots of a house being renovated shows the rock on which these hills stand: there was not so much earthquake damage to the houses here in 1906, but of course the fires took a huge toll. I found it interesting that most of the street trees are Australian Natives - paperbarks, bottle brush and various eucalypts. The guide was delighted to have Australians on the tour who recognised the trees: they ask questions and love it when the tourists venture an opinion. My recognition of trees was better than Barry's estimation of house prices as we responded to her questions! I don't know how come they chose these plantings, but I am always very charmed to see the tiny shimmering humming birds feeding on the flowers of the Australian natives, a bit like us learning to eat transplanted Vietnamese food, I suppose. The link to the full set of photos is http://picasaweb.google.com.au/bjoymarsh/2008_09_22TourOfTheCastroAndStreetNearSFOpera#

We saw areas which had been owned by various colourful historic San Francisco luminaries in the volatile financial times after the Gold Rush and heard tales of some of these extraordinary characters. We heard a lot about Harvey Milk, who according to Wikipedia was the first openly gay non-incumbent man in the United States to win an election for public office (he was on the Board of Supervisors), and was subsequently murdered in his office along with Mayor Moscone. This crime led the gay community into unprecedented political activism, and there are Harvey Milk memorials all about. One other thing I learned about him is that he was the person who first introduced a pooper scooper ordinance. I guess I have him to thank indirectly for the little zippered plastic bag storage pouch which attaches to Jesse's lead (Boroondara Council now sends you one when you first register your dog to make cleaning up after it that much easier).
The grand 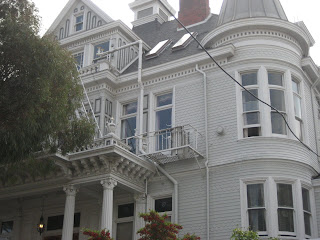 residence below was built by the person who controlled San Francisco's water supply. There were huge scandals and his wife eventually left him and they never lived there. But what a gorgeous place! This is a side view as I couldn't get a good shot from directly in front for the trees(the partly obscured shots are on the album).

There is a Harvey Milk memorial building occupied by the Social Service department, with a wonderfully diverse mosaic mural that I took a few shots of. I missed some of the guide's chat about the place and about Milk's story because there was a car event happening in a park down the hill a block before we got there, with lovingly maintained or restored US cars of the 50s and 60's - more than I've seen since we were in Havana. I spent some time ogling the cars and the mural in the park (see the photo) so had to catch up with the group at their next stop. After the car photo there is one of the Milk memorial mural. 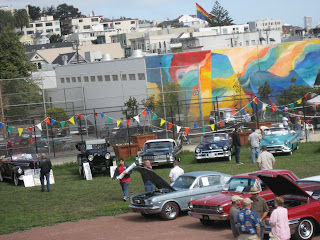 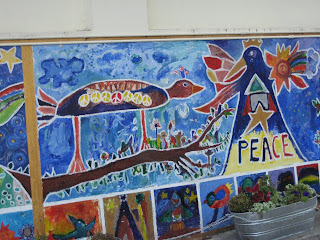 At the end of the tour we assembled on Castro Avenue at the site where people still gather for demonstrations and at times of significant public events. We saw the site of the original Castro Theatre, now a large clothing store, and spent a bit of time looking at the ornate Moorish design features of the current theatre which was built in the 20's or 30's. I couldn't resist a few shots of the facade and tiling. We picked up a calendar of screenings, but I can't really see us schlepping into San Francisco to see a revival when we can now so easily get them home delivered on DVD from Netflix. We saw the first public gay bars and generally got the flavour of the district before taking a trolley towards the Opera House for our 2PM performance.

We didn't think we'd have time for lunch in the Castro before leaving - we had to pick up our tickets at the box office but hadn't realised just how easy this would be. The last few pictures on the web album are of nice features on some of the buildings we walked past on our way there that I couldn't resist. We got to the theatre in plenty of time to have a sandwich in the cafe downstairs and read the programme before the performance (noting again the extraordinarily large list of donors of large amounts of money).
We usually drive to El Cerrito station rather than Berkeley to take the BART into San Francisco. The parking is much easier and there are a couple of big supermarkets (as well as a Weight Watcher's meeting) in the adjacent mall, so after we got back to Berkeley in the evening, we did a bit of a shop at Trader Joe's and Lucky before heading home. A rotisserie chook and heaps of salad seemed like a good plan for a quick dinner that night.
Posted by Barbara at 5:20 pm